Whistle-blowers: We’re not scared because we are telling the truth | Inquirer News

Whistle-blowers: We’re not scared because we are telling the truth 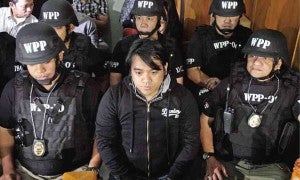 “We are looking forward to facing her,” Benhur Luy told the Inquirer last week. “We are not scared because we are telling the truth.”

Luy and 10 other former Napoles employees have submitted statements implicating the businesswoman in a P10-billion racket that turned allocations under the congressional Priority Development Assistance Fund (PDAF) and government revenues from oil and gas wells in Malampaya off Palawan province into kickbacks.

Luy earlier said that Napoles kept a “red book” that supposedly contained records of her transactions, including payoffs to lawmakers.

“I will tell her to show her red book where she wrote down all her transactions. I will even offer to help organize it if she would allow me,” said Luy, who claimed he was held hostage by Napoles for three months for threatening to reveal her illegal activities.

The scheduled face-off Thursday in the Senate would be the first between the two since Napoles allegedly ordered her aides to hold him captive on Dec. 19, 2012. Napoles is under police custody in connection with this alleged kidnapping incident.

“I hope it will not turn into a showdown and become a circus for the people to truly understand the extent of what she has done,” Luy said.

He did not sound optimistic about Napoles’ testimony.

“Based on what I know of her, she will not say anything, unless she gets something in return, or she could also lie because she is really good at it,” he said.

Marina Sula, a former Napoles bookkeeper, said she would not feel intimidated by her former employer.

“We have prepared for this and if she even tries to lie, we will tell her right there that she is a liar,” said Sula, who has executed an affidavit submitted to the National Bureau of Investigation saying that Napoles had amassed properties worth P5 billion with PDAF proceeds from ghost projects coursed through her 20 bogus nongovernment organizations.

Merlina Suñas, a project coordinator, said the P900-million Napoles allegedly secured from the Malampaya Fund and channeled through the Department of Agrarian Reform for victims of Storms “Ondoy” and “Pepeng” went to the pockets of the businesswoman and her DAR conduits.

“I am ready to face her and remind her of her instructions to me about the Malampaya Fund,” she said. “She could not deny there was no delivery at all in that project because I was her assigned coordinator.”