Napoles at Senate Thursday: Will she talk? 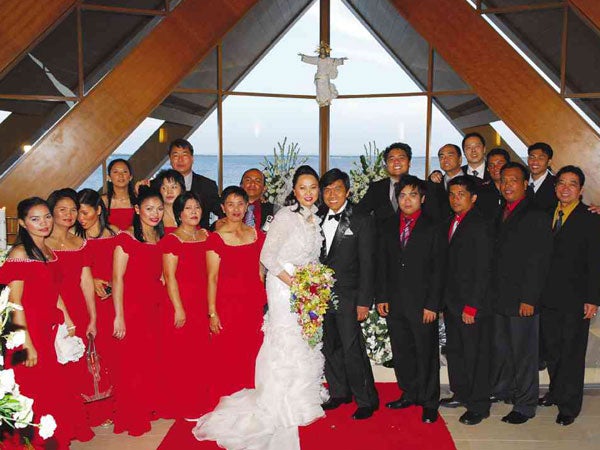 THOSE WERE THE DAYS, MY FRIEND Relatives and employees flank Jimmy and Janet Napoles during the celebration of their 25th wedding anniversary in Cebu City on Jan. 28, 2007. Now, five persons in the photo have turned state witnesses in the plunder case against Janet Lim-Napoles in connection with the alleged P10-billion pork barrel scam. From left (first row) are Vanessa Emman, Lillian Español, Charlie Tulidod, Nova Dulay, Evelyn de Leon, Merlina Suñas, Janet and Jimmy, Benhur Luy, Roy Bongalo, Henry Soliman and Simplicio Gumafelix. At the back (from left) are Mylene Encarnacion, Baby Sula, Ronald Lim, Rod Galay, John Lim, Reynald Lim, Nathaniel Tan (deceased), Fernando Ramirez and Vincent Enerlan. The gowns were all made by Eddie Baddeo. CONTRIBUTED PHOTO

The last thing Justice Secretary Leila de Lima expects of Janet Lim-Napoles when she appears Thursday before the Senate blue ribbon committee is to spill the beans on the P10-billion pork barrel scam the detained businesswoman allegedly engineered.

“If there is no offer of immunity, it means she’s opening herself to self-incrimination,” De Lima told reporters after speaking at the First Fraud Conference at Hotel Intercontinental in Makati City.

Expected to attend the hearing are 12 senators, including Sen. Miriam Defensor-Santiago, who said she would leave her sickbed “to confront Janet Napoles today to show that she cannot take advantage of the right against self-incrimination.”

While the Senate has the inherent power to compel the attendance of witnesses in its investigations in aid of legislation, De Lima pointed out that they could always invoke their right against self-incrimination. She said senators could not force Napoles to answer their questions.

“The only way is to offer immunity but a host of questions will arise,” De Lima said. “There’s nothing much that we can expect in terms of substance in her testimony,” she said in an earlier TV interview with ANC’s Karen Davila.

Sen. Teofisto Guingona III, the blue ribbon committee chair, earlier said a grant of immunity would depend on Napoles’ response to the questioning.

Security has been tightened for the appearance of the 49-year-old Napoles, who is detained at the Philippine National Police antiterrorist school in Sto. Domingo Camp in Sta. Rosa, Laguna province, in connection with a kidnapping case involving her former employee Benhur Luy.

Luy’s rescue by the National Bureau of Investigation on March 22 led to revelations that Napoles channeled some P10 billion into ghost projects from the congressional Priority Development Assistance Fund (PDAF) and P900 million from the Malampaya Fund intended for impoverished farmers and victims of devastating storms in 2009.

Napoles has been named in a plunder complaint in the Office of the Ombudsman in the PDAF racket, along with Senators Juan Ponce Enrile, Jinggoy Estrada and Ramon Revilla Jr. who have denied any wrongdoing. A similar charge has been leveled against her in the Malampaya Fund scam.

During Thursday’s hearing, Napoles will face for the first time since her detention Luy and 10 other former employees who have turned state witnesses and have executed damning statements against her.

In a last-minute bid to delay the hearing, Napoles on Tuesday requested a postponement, saying that she still has to hire a lawyer to represent her in the plunder complaints lodged by the NBI and the Department of Justice in the Office of the Ombudsman and assist her in her Senate testimony.

But Guingona has turned down the request and instead directed the office of the public attorney to provide her a lawyer normally assisting pauper litigants.

Napoles’ high profile lawyer, Lorna Kapunan, last week resigned as her counsel purportedly over differences with the businesswoman’s longtime lawyer, Alfredo Villamor. However, Villamor said he was hired to handle only the illegal detention case, not to assist her in her plunder case or her Senate appearance.

“Based on what I know of her, she will not say anything, unless she gets something in return,” Luy told the Inquirer, echoing De Lima’s concerns.

Senate President Franklin Drilon said Napoles could refuse the services of the public attorney’s office, citing a Senate rule on inquiries in aid of legislation: “At every hearing, public or executive, every witness shall be accorded the right of having a counsel of his own choice.”

He also cited Section 12 of the Bill of Rights that provides: “Any person under investigation for the commission of an offense shall have right … to have competent and independent counsel preferably of his own choice…”

“But even if she turns down the PAO lawyers, she can’t ignore the hearing tomorrow because she has already been subpoenaed by the Senate,” he said.

Drilon said Napoles could still be questioned even without a lawyer. “It will be up to her whether she will answer or not,” he said.

Earlier, Drilon expressed reluctance at summoning Napoles to the hearing, citing the Ombudsman’s inquiry. He sought the opinion of Ombudsman Conchita Carpio Morales to support his position, but relented after Guingona insisted that the Senate’s power to call witnesses cannot be overruled by the Ombudsman.

Drilon has insisted he does not know Napoles, but a photograph showing him with the businesswoman in a party has been widely publicized and has gone viral on social media. He has also acknowledged that Rene Villa, appointed in January as chair of the Local Water Utilities Administration, was his political protégé. Villa was a Napoles lawyer before he joined the Aquino administration.

“I expect her to keep quiet,” said Sen. Sergio Osmeña III. “The Senate has only a few options here. It’s really up to the star witness and her lawyers. If the lawyer’s advice is for her not to talk at this time, there’s not much we can do about it.”

Osmeña recalled the Senate inquiry in 2003 into the so-called Jose Pidal bank account—a corruption case involving the laundering of P321 million in election campaign funds—when then First Gentleman Jose Miguel Arroyo and his brother Ignacio evaded questions by citing the right to remain silent and the right to privacy.

“So, we’re hoping against hope that she will enlighten the nation not only the Senate but the entire nation on the arrangements that were made that cheated the people of this country out of tens of billions of pesos,” Osmeña said.

“But whether this will be the venue, whether the Senate or the trial before the Sandiganbayan will be the proper venue, that’s something that she and her lawyers can decide,” Osmeña added.

Like most of his colleagues, Osmeña wants Napoles to tell the committee “the whole story.”

“When did this start, how much money passed through you and who are the legislators involved and who are your coconspirators in masterminding this,” Osmeña said in recounting the information he wants to get from Napoles.

Asked what options remain left for the Senate to get Napoles to speak, Osmeña told reporters of his proposal to give her immunity.

“Explore the possibility of partial immunity. We don’t have too many legal weapons at our disposal. She certainly doesn’t have to lie. All she has to do is keep quiet and under the Constitution, you have the right to remain silent,” Osmeña said.

A partial immunity, Osmeña said, could mean Napoles’ testimony in the Senate would not be used as evidence against her in her plunder cases.

Sen. Francis Escudero told reporters citing Napoles for contempt for clamming up or lying might not mean much.

“Since she already has a commitment order from the court, even if she’s cited for contempt, she will still be detained in Sta. Rosa,” Escudero said.

Guingona earlier said that while Napoles could invoke her right to remain silent she could not do so on every question.

“It can’t be that even if the question is what’s your name, she’ll invoke her right against self-incrimination,” he said.

Napoles to remain jailed in Sta. Rosa if Senate cites her in contempt
De Lima: I don’t expect Napoles to tell the truth
De Lima defends PAO’s representation of Napoles in Senate inquiry