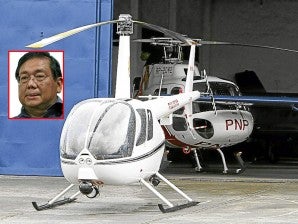 QUOTH THE RAVEN, ‘NEVER MORE’ A Robinson R-44 Raven, one of two sold to the police as brand-new, is parked at the PNP hangar in the Manila International Airport Authority compound in Pasay City. Inset is the picture of former First Gentleman Jose Miguel Arroyo. INQUIRER PHOTO

They didn’t quite believe his brother.

Former First Gentleman Jose Miguel Arroyo and several former high-ranking police officials, including former police chief Jesus Verzosa, have been charged with plunder in the Office of the Ombudsman in connection with the allegedly anomalous purchase of secondhand helicopters  by the Philippine National Police in 2009.

Twenty-six respondents were named in the plunder and related or “predicate” charges, including former Interior Secretary Ronaldo Puno, retired and active police officials and executives of the companies that supplied the choppers—Archibald Po of Lionair,  Hilario de Vera of the Manila Aerospace Products Trading (Maptra) and Renato Sia of Asian Spirit.

Concerning the claim of Arroyo’s brother, Negros Occidental Representative Ignacio Arroyo that the helicopters were leased by the family corporation under his direction, Director Samuel D. Pagdilao Jr., chief for the PNP’s Criminal Investigation and Detection Group (CIDG), said the congressman’s participation “could be that of covering up or assuming ownership.”

“But whether or not he is involved in the transaction itself is something we have not established in our investigation,” he told reporters.

The plunder complaint—filed by the PNP’s antifraud division chief Senior Superintendent Edgar Danao—stemmed from revelations in an ongoing Senate investigation into the purchase by the PNP of three choppers for P104.9 million in 2009. Two of the choppers were allegedly secondhand.

Witnesses at the Senate inquiry claimed that Arroyo, the husband of former President Gloria Macapagal-Arroyo, was the owner of two of three R-44 Raven choppers that were passed off as brand-new to the PNP.

“We believe we have a good case against the former FG (First Gentleman),” said Pagdilao.

He said most of the evidence used in filing the charges came up during the Senate hearings, such as Arroyo’s alleged ownership of the choppers that was established by the testimonies of Po and De Vera.

“There are also circumstantial evidence establishing beneficial use of an owner. The statements of helicopter pilots were also considered and these are [indications] of ownership,” Pagdilao told a press briefing Friday.

Senator Franklin Drilon, one of the senators who participated in the Senate investigation into the controversy, said he was curious about the CIDG’s evidence.

“I hope they are not jumping the gun on the Senate because the investigation is not yet finished,” Drilon said.

“I would like to see the evidence that they have in support of the case,” he said.

In a statement, Arroyo said the filing of the plunder charges against him was part of the harassment and persecution of his family by the Aquino administration.

“The PNP never asked to get my side. They never included me in their investigation. How can they file a complaint against me based only on allegations of a resource person with a questionable background hiding under the witness protection program to escape conviction for being the mastermind of the sale of choppers to PNP? And without a single document on hand supporting the CIDG’s false claim that I own the choppers,” Arroyo said.

“This is clearly a pattern of harassment and persecutory tactics to vilify the Arroyos even without evidence. Until now, I do not even have a copy of the CIDG complaint. I do not know what is the basis of my being included in the CIDG complaint,” he said.

Malacañang on Friday welcomed the filing of the plunder charges against Arroyo and the former police officers.

“We hope that this reinforces the concept of accountability that we have been trying to promote,” said deputy presidential spokesperson Abigail Valte.

Seventeen of the 26 respondents were charged with plunder, along with related or “predicate” charges, including falsification of documents and violation of procurement laws and the Anti-Graft and Corrupt Practices Act.

The nine others, all active PNP officers, will face only the predicate charges.

Pagdilao said the 26 were found to have taken “undue advantage of their official position, authority, relationship, connection or influence to unjustly enrich themselves of more than P50 million received in the form of pecuniary benefit in connection with the 2009 procurement of three Light Police Operational Helicopters.”

He said the elements of plunder were present in the case, noting that the P105 million transaction more than satisfied the P50 million requirement for the filing of a plunder case under Republic Act No. 7080.

Danao said there was a conspiracy since “traces of dirty hands” were everywhere, and “the mantle of cover-up was so immense.”

He said there appeared to be a deliberate effort to push for the purchase of the Raven I helicopters that Arroyo allegedly owned.

Pagdilao admitted that the CIDG investigating team led by Senior Superintendent Christopher Laxa had relied heavily on the televised hearings of the Senate blue ribbon committee during which many revelations, including the Arroyo connection, had come out.

He said the CIDG had not taken any statement from Arroyo, noting that the latter had spurned invitations by the Senate blue ribbon committee to attend its hearings.

“But of course with the evidence we have presented, our investigating team believes there is sufficient evidence to prove ownership,” Pagdilao said.

Pagdilao said the CIDG had sought to conduct an impersonal and meticulous investigation, and had not been influenced by loyalty toward the retired police officials, especially their former boss, Verzosa.

“There’s nothing personal here. In fact, if personal sentiments were involved in this investigation, then only civilians would be charged,” he said.

“It’s very difficult to file cases against your own brother officers but they’ll also understand because they’re also professional officers,” he said.

In a statement through his lawyer, Verzosa said the filing of formal charges was “a welcome relief.”

“Now the wheels of justice will start to move and we trust in the rule of law to ferret out the truth. At least now, we shall be dealing with the rules of court, evidence and basic rudiments of fair play. We maintain that General Verzosa acted within the bounds of the procurement law and he shall eventually be cleared by our courts,” lawyer Benjamin de los Santos said in a text message.

Pagdilao raised the possibility of Po turning state witness but only if he is found to be the least guilty among the respondents.

Po had told the Senate inquiry that Arroyo had bought five helicopters from him before the 2004 elections and that two of the three R-44 Raven 1 helicopters were later sold to PNP, being passed off as brand-new.

Arroyo has denied Po’s allegations and has sued him for perjury.

De Vera told the senators that Po had pressured him into selling the two used units to the PNP allegedly at Arroyo’s behest.

Lionair is the exclusive distributor of Robinson helicopters in the country, and Maptra is its marketing agent accredited to transact with the PNP.

It was Maptra that directly negotiated for the PNP’s 2009 purchase of the three choppers for P104.9 million. One was genuinely new, having logged only 9.9 hours of flying time.

But the two others were found to have logged an average flying time of 500 hours. The two Robinson choppers (with body number RP 4375 and RP 4250) were previously registered to the Asian Spirit airline which leased them to Lionair in 2004.

Flight logs showed that members of the Arroyo family had been frequent passengers of the two choppers before these were sold to the PNP.

Danao said the procuring entity ignored the existence of the flight log and engine logbook which showed that the helicopters had registered an average of 500 hours of flight.

“Despite tell-tale signs, most if not all of the respondents who signed the pertinent documents attested that the Raven I helicopters were brand-new,” he said.

The members of the PNP’s bids and awards committee who took part in the purchase of the helicopters were also charged.