From classroom tutor to plant prof 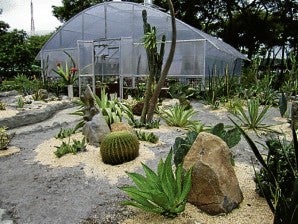 This cactus and succulent garden designed by Serapion Metilla at the Quezon Memorial Circle is perhaps one of its kind in the world. DAX METILLA

When Quezon City celebrated its foundation anniversary recently, the local government also formally opened a new feature of the memorial circle across city hall that is a shrine to the Commonwealth President of the Philippines, Manuel Luis Quezon, after whom the city is named.

Mayor Herbert Bautista wanted to make his city a green enclave and thought of starting with the Quezon Memorial Circle. The idea actually had been raised by members of the Cactus and Succulent Society (CSS), the Philippine Horticultural Society (PHS) and the Bonsai and Suiseki Association of the Philippines, Inc. with the previous administration.

The organizations officers, particularly Dorie Bernabe, had already asked, through city engineer Zaldy dela Rosa, who is in charge of QC Parks Development, for a permanent site where they could display show plants all year round. When Bautista raised the possibility of a flower garden for the circle, Bernabe presented anew the organizations’ proposal. This time around, the proposal was accepted. The PHS and CSS each got several square meters of land for their projects.

The task of creating a desert garden fell on the indefatigable Serapion Metilla, a self-described promdi (street lingo for “from the provinces,” meaning, a country bumpkin) who metamorphosed from public school teacher into an acknowledged plant artist and professor of Ikebana, the Japanese art of  flower arrangement.

It did not help that the project started in the middle of the typhoon season. As typhoon after typhoon battered the country and rains poured incessantly, Metilla toiled to create a virtual desert paradise, often finding the plot he was cultivating water-logged and muddy in the early days of the project.

The assignment would have disheartened much younger people. But not the 84-year-old Metilla.

To make the land suitable for the plants, gravel and sand were poured over the soil so the planting medium would not retain water.

The cactus garden is probably the only one of its kind in the country. “I have seen similar displays in other countries but they are in greenhouses or are shown for commercial purposes,” Metilla said.  His design has both an outdoor display and a greenhouse.

The CSS could not have chosen a better person for the job. Metilla seems to be at his most determined and innovative when the situation is highly challenging. In fact, it is this never-say-die attitude that has marked the remarkable life of this “transplant” from Davao.

As a young man, Metilla accepted an assignment as a temporary teacher in a remote village in his native Davao, where there was hardly a school to speak of. Soliciting donations from landowners, the enterprising teacher managed to get two pieces of property where the community—which donated labor and materials—

constructed a modest school for what was initially a Grade I class.

Metilla combined classroom instruction and practicum. His class helped harvest palay and used what they earned to buy school essentials, went on picnics along the river and wrote about these for the language class.

He taught his pupils songs and folkdances and had them perform in barrio fiestas and social occasions not only to earn some money for school needs but also to teach them table manners and other social graces.

When he moved to Kamuning Elementary School in Quezon City, he again tried to give his students a well-rounded education, linking classroom instruction and real life, and allowing them to explore their interests. He organized a garden club, a dance troupe and a student government. As a member of the Philippine Art Educators’ Association, he encouraged his pupils to participate in its exhibits.

As principal of the Constitution Hill Elementary School, he prodded home economics students to join a city-wide cooking contest, working with his home economics teacher to come up with a complete meal that cost only P7, an adequate sum then.

The meal consisted of kalabasa patties, tinapa, coconut milk, tulya and rice. The menu won first prize in the district and second in the city competition.

Metilla would quit, however, without reaching the mandatory age of retirement for public school teachers.

The pull of another passion, nurtured even before he became a teacher, had become too strong to resist. He decided to concentrate on his life-long fascination with plants, an interest sparked by a sister’s own collection.

The fledgling green thumb did not have any formal lessons in gardening and plant propagation. His expertise, he said. was the result of “trial and error.”

With his Kamuning boy scouts troop in tow, he “gate-crashed” shows of the University of the Philippines Garden Club, even picking up pointers on how to write press releases from Federico Mangahas, a club member.

Over the years, he mastered the art of Ikebana enough for him to earn the title of professor and developing different ways of turning plants into art works. He remains a very popular garden lecturer/teacher and is proud of the many students he has helped who have set up their own lucrative plant businesses.

On Sunday at 2 p.m., Metilla will once again don the hat of teacher when he gives a lecture on “Oxygen Therapy through Indoor Gardening for Healthy Living” at the close of the Philippine Orchid Society garden show at the QC Memorial Circle.