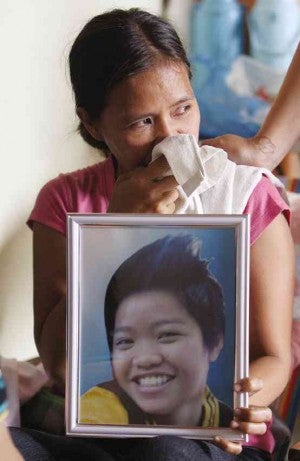 On Sunday, around 3 a.m., Helen Perico awoke with a start at the family home in Camiling, Tarlac province.

She thought she heard a girl crying “Mama, mama!” and tapping a plastic pail, the sounds coming from the bathroom. She went there but found it empty.

A relative on the other of the line delivered the shocking news: Perico’s daughter April Rose was killed after saving her grandparents from a fire that struck their Quezon City neighborhood about an hour before Helen awoke.

It will never be known what really drove the 15-year-old April to run back to their burning house, carrying a pail of water, after rousing her elders from sleep and leading them out to safety as the flames engulfed the property on Republic Avenue, Barangay Greater Fairview.

The only thing certain is that family members will never forget the brief but tragic life of the girl they fondly nicknamed Peelot. (She had a toddler cousin who had difficulty saying ‘April Rose’ and the mispronounced name stuck.)

“She always cheered up people around her,” said Delia dela Rosa, 55, the grandma whom Peelot awoke just in time for her and her husband to rush out of the inferno.

“She was a very sweet and affectionate girl. Very friendly. She loved to read and study,” Dela Rosa said, holding back tears as she looked at the closed white coffin bearing Peelot’s remains at the Mabuting Pastol (Good Shepherd) chapel, a few meters away from where their home once stood.

Dela Rosa said she had practically raised Peelot since childhood after her parents allowed her stay with her old folks in Quezon City. Having the kid around brought back cheer in the Dela Rosa couple’s empty nest.

“Peelot became our baby in the family,” she said, noting that April was never a problem child as she grew up mild-mannered and well-behaved. The girl was a junior student at North Fairview High School.

But around 2 a.m. of Nov. 3, in the chaos of an unfolding disaster, April’s attempt to save not just family members but everything they held dear took her to deadly extremes.

“Peelot woke us up. She ran downstairs and alerted us to the fire which was on the second floor. Everything was covered in smoke but we managed to find the exit and call for help from our neighbors,” Dela Rosa recalled.

They had just reentered the house to save items not yet reached by the flames on the ground floor, when they saw someone running past them with a pail of water and climbing up the stairs.

It was too late when they realized that it was Peelot.

And then the second-floor ceiling collapsed, trapping Peelot and shutting off access through the stairs.

“I could hear her shouting, ‘Nanay, I can’t get out! Help me!’ But we had already rushed out because the smoke and the heat were becoming unbearable; nobody could go back inside to get her. I shouted and begged her to just jump out of the window. Everyone was telling her to do  everything she could to escape—until her cries stopped,” Dela Rosa said.

Firemen later found her body pinned under the debris.