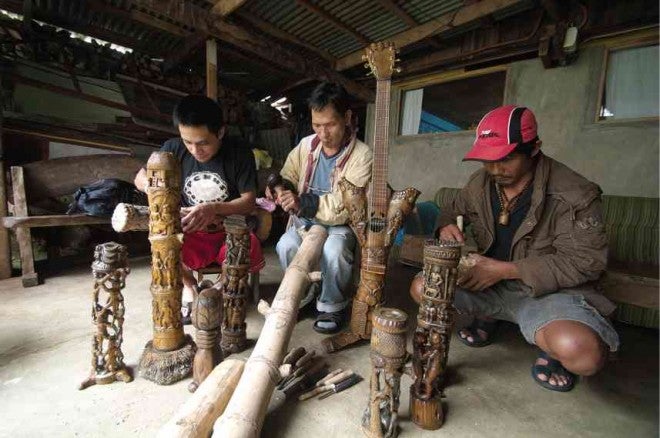 IFUGAO carvers (from left) Roldan Dulnuan Pait, Nestor Anabon and David Namalmag show off the products they carved from bamboo, a new material that they hope will turn around the local woodcarving industry. RICHARD BALONGLONG

Ifugao wood carvers who have settled in Tuba town in Benguet province have started an industry that for years have been catering to local and foreign tourists visiting Baguio City.

From the workshops of Asin village come mass-produced items which have become icons of sort in the summer capital. These included the Indian tribal chief of the American West, the “man in the barrel,” “bulul” (Ifugao rice granary guardian), and even ashtrays featuring a man’s sexual organ.

But a group of carvers wants to veer away from these products and look for alternative, environment friendly materials to sustain the industry, which has given livelihood to many Ifugao families who have settled in Baguio and Benguet.

Members of the Asin Bamboo Carvers Guild Inc. (ABCGI) say they have shifted to bamboo so they can offer unique and quality products to the market.

Roldan Dulnuan Pait, ABCGI president, says the concept started after a section of the city dump in Barangay Irisan collapsed in 2011, burying a portion of the Asin community in trash. Soon after the tragedy, the Philippine Bamboo Foundation Inc. (PBFI) introduced bamboo to the community as a soil erosion control to prevent landslides there.

“The PBFI was also interested in the plight of wood carvers who eventually stopped carving because of the scarcity of hardwood. Carvers also work as small-scale miners and taxi drivers because the industry is dying,” Pait says.

“So the foundation thought, why not revive the industry without a single tree being cut? That’s when bamboo, as an alternative material, was introduced to the carvers,” he says.

PBFI officials visited the community in 2011 to announce the foundation’s 1st Bamboo Carving Competition exclusively for Asin carvers to entice them to try the new material. They also explained to the carvers the foundation’s vision for the bamboo industry and its long-term economic benefits.

The Asin carvers took the challenge and submitted 42 entries to the competition. After that, ABCGI members started joining exhibitions in Metro Manila’s shopping malls, enabling them to sell their bamboo carvings.

In September, the group, represented by Pait, exhibited its works during an international exports promotion seminar in India.

The ABCGI has a permanent exhibit at Baguio’s White House on Leonard Wood Road. A bamboo nursery is also being maintained by local foresters and the PBFI there.

“It is through these exhibits that we have realized that there is a market for bamboo carvings. We are not doing the usual designs anymore… we were told that we should elevate our work to the level of art, and do unique designs,” Pait says.

He says their carvings now focus on themes, usually featuring Ifugao culture, tradition and folklore. Prices of each work range from P12,000 to P30,000, depending on the intricacy of the design.

Their mass-produced items have attracted buyers who could get a bargain in bulk purchases.

With the introduction of the fast-growing bamboo, Pait says carvers like him have found a sustainable way of reviving the industry.

“This will be continuous, we need to reforest and preserve our environment. For so many years, Asin wood carvers have been known as tree cutters. Now, we want to change that; we want to contribute in preserving the environment,” he says.

Pait says the ABCGI is looking at patches of land in Asin, Teachers’ Camp, Atok town and even abandoned mine sites in Benguet to cultivate bamboo.

“Bamboo grows fast. In three years, it can be harvested, unlike hardwood which takes 25 years to mature,” he says.

Nestor Anabon, 51, says working his chisel to carve bamboo is hard. “At first, it was difficult because bamboo is harder than the wood which we used to carve. But I have gotten used to it and I found this material better than hardwood,” he says.

Pait says it takes a carver two to three weeks to finish a bamboo carving, compared to hardwood, which takes only a few days to a week.

“But bamboo carving is worth one’s time because we are doing works of art. Our mission is to sustain the Ifugao’s wood carving tradition,” he says.