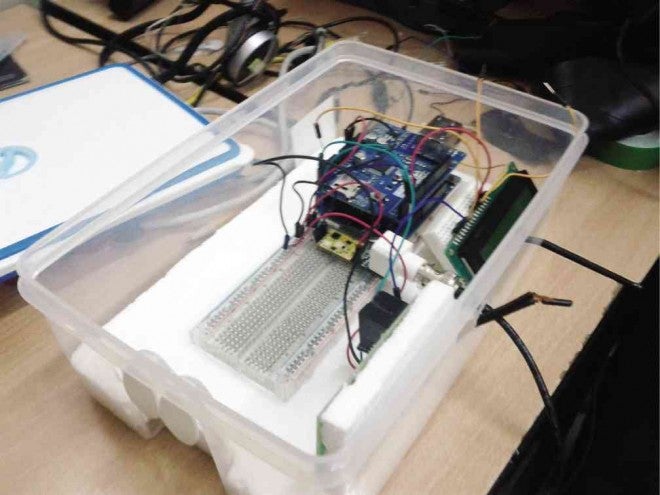 THIS prototype of the Arduino Dissolved Oxygen (DO) sensor automatically turns on a fishpond’s aerator system when the DO level is low and shuts it off when it normalizes. CONTRIBUTED PHOTO

Devastating fishkills in ponds and cages in aquaculture areas in the country will soon be things of the past, thanks to a gadget developed by a team of information technology (IT) professionals in Dagupan City.

“We were looking for ways where technology could be applied to solve a problem. I’ve read news reports on a regular basis about millions of pesos [worth of bangus or milkfish] lost to fishkills. So I thought of applying technology to this problem,” said Wilson Chua, president of Bitstop Network Services Inc., based in the coastal city of Dagupan in Pangasinan province.

According to Chua, the device is based on a low-cost computing platform called Arduino, which was developed in Italy.

“I first heard of it from friends at NUS (National University of Singapore). They were using it for all sorts of applications like measuring air quality, robotics, etc. So, I know that the Arduino was a low-cost general purpose computing platform that could form the brains of any solution,” he said.

Chua then ordered a DO sensor from Atlas Scientific (https://www.atlas-scientific.com/product_pages/kits/do-kit.html). “It was one of the very few select sensors that was rated to work with Arduino,” he said.

He organized his team composed of Kristher Vidal as web and database developer, Albert Estillore as Arduino programmer and IT students who joined his firm’s advanced research program.

“The project almost died an inglorious death. The DO kit languished at the Bureau of Customs (BOC) for quite some time. Several calls were placed to ask its whereabouts, but the phone there just kept ringing,” Chua said.

Frustrated, he said he asked his Facebook friends if they had contacts in the BOC who can help him with the shipment.

“Up came Jay Fajardo, who is well-known in the [IT] community. He relayed my concern to the Biazons (Customs Commissioner Ruffy Biazon and his father, Muntinlupa City Rep. Rodolfo Biazon). Amazingly, the next day, we learned that the shipment will be in Dagupan one day later,” Chua said.

He said the gadget was completed within two months. For the next two months, it was tested at the National Integrated Fisheries Technology Development Center (NIFTDC) in Dagupan.

Westly Rosario, NIFTDC chief, said the gadget, which he described as the first of its kind in the local aquaculture industry, was a welcome development.

“We have always said that the only way to improve our production capacity is through the use of [fish] feed to produce more biomass per unit area. And to do this, we need to provide artificial food, plus of course, oxygen, which includes aeration devices,” Rosario said.

In the use of aeration devices, however, the Philippines has been lagging behind because of high operation cost, he said. “We just have to use it in a smart way [to save cost]. Don’t turn it on when you do not need it.”

Chua’s gadget will be a big help not only to the bangus industry in Pangasinan but to the aquaculture industry in the country. “It is because our problem in fish cages and ponds is fishkill. In the shrimp industry, which is high value, the DO level is very critical,” Rosario said.

“Aerators are operated manually and you have to measure the DO level every now and then. If you do this, there is a big chance that your stocks will get sick because the probe (measuring rod or stick) may get contaminated,” he said.

What excites Chua about the device is its capability to upload data to the Internet. “This solution not only turns on [and off] an aerator. It measures both oxygen and temperature levels in the waters where it is placed,” he said.

Through the device, Chua said a provincewide alert system for preventing fishkills could be set up.

“As more pond owners deploy this solution, we can map their geographic location into our database and coordinate with the relevant government agency to send out alerts. As we see oxygen levels start to fall from upstream river systems, we can warn pond owners about it, and give them time to harvest earlier,” Chua said.