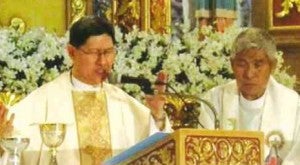 ROSARIO, Cavite—“To whoever would be taking charge of my funeral, I ask only for a poor man’s burial.”

After uttering these words, activist priest Jose “Joe” P. Dizon, who had consistently fought for the oppressed since the martial law regime of Ferdinand Marcos in the 1970s, collapsed before a shocked audience of friends and colleagues at the end of a Mass at the Holy Rosary Parish Church here last month.

Dizon, 65, a diabetic, was brought to the National Kidney and Transplant Institute in Quezon City and was discharged a week later. He was again confined at the hospital on Oct. 29 for an infected wound in the foot and stayed at the intensive care unit due to lung and kidney complications until he died at 11:15 p.m. on Monday.

The Mass held here on Oct. 15 marked his 40th year as a diocesan priest, which he concelebrated with Manila Archbishop Luis Antonio Cardinal Tagle and Imus Bishop Reynaldo G. Evangelista.

For 40 years, Dizon sustained his faith and advocacy for the oppressed but not without trials. People, he said, many times questioned his vocation.

‘Church of the Poor’

“I don’t mind the state (criticizing me) but when it’s your own institution, your own priest-brothers doubting you, that’s what’s more painful,” he told the Inquirer in an interview a week after the Mass in Cavite. “But I am a priest today because it is clear to me that my commitment is for the Church of the Poor, that it is what the church should be.”

“During those trying times, times of doubts and tensions in the Church, God proved, all these years, that He was faithful to His promise never to abandon me. I intend to live for another 50 years, but I am (also) ready to die,” Dizon said.

According to the Catholic Bishops’ Conference of the Philippines, Dizon was the lead animator of Solidarity Philippines, a movement to proactively advance the social teachings of the Church. He was a convenor of the National Clergy Discernment Group.

He was also a leader of the election watchdog Kontra Daya. In his last days, he joined the campaign to abolish the pork barrel amid the scam that allegedly channeled some P10 billion in Priority Development Assistance Fund to bogus nongovernment organizations.

Dizon, who hailed from Caloocan City, was 16 when he entered the Our Lady of Guadalupe Seminary in Makati City in 1965. It was the decade of social unrest and Vatican reforms and, in the Philippines, the nationalist movement. “The choice of apostolate was no longer limited to teaching catechism and parish work,” he recalled in the interview.

His retreat masters were the likes of fellow activist priests Ed de la Torre and Luis Jalandoni, and his community work was with the farmers.

In 1969, “I was told to leave the seminary because they said what I’d been doing was not priestly. They told me I did not have a vocation,” Dizon said. He said he wept and prayed until Rufino Cardinal Santos, then the Manila archbishop and a good friend of his, ordered his return to the study of priesthood.

Dizon was ordained in 1972, the year the Marcos dictatorship declared martial law. His first parish assignment was in a private subdivision in Bacoor, Cavite province. When the village banned nonhomeowners from attending services at the parish church, he took the patron saint to the poor families outside.

“I introduced the dalaw-patron and went around teaching catechism. At that time, it was considered taboo and I was criticized for it,” he had said.

But Dizon was not to be discouraged, even if he was aware that soldiers were watching him whenever he said Mass.

His parish of seven years served as a sanctuary for “people on the run,” as he took in those from the underground movement, including Jose Maria Sison, founder of the Communist Party of the Philippines.

“He (Sison) stayed for over a month and I didn’t even know who he was. I remember he discussed with me the ‘Struggle for National Democracy,’ a collection of political writings,” he said.

Dizon’s exposure to mass struggles deepened when he joined the 1975 workers’ strike at La Tondeña distillery in Manila and a 1977 rally of 300 Makati families against demolition. “I had a reflection: these people were being forced out of their cramped homes, when my church was so big yet empty,” he said.

By 1979, Dizon headed the Basic Christian Community-Community Organizing, a church program that “analyzed”society’s ills and taught faith to people. He said the program allowed his immersion in poor communities until its founder called his attention one day to his reports about militarization.

“Are you organizing your people to overthrow your government?” Dizon quoted him as saying.

When asked what his contributions to the program were, he replied with the list of women raped and men tortured, arrested and killed in the countryside.

“I told him, ‘If this was not the kind of counterpart you’re asking of me, I didn’t know what else. You’re giving money for the program but we were giving our lives,’” Dizon said.

Dizon led and joined more protests before and beyond the 1986 Edsa Revolution. He helped convene people’s alliances, among them the Workers’ Assistance Center (WAC), which he founded on Nov. 30, 1995.

The WAC organized the Solidarity of Cavite Workers (SCW), which assists union organizers in the Cavite export processing zones. Today, the SCW claims a membership of around 10,000 union members and other workers.

“The (workers’ plight) is his No. 1 advocacy apart from his work in the church,” said Cecilia Tuico, international relations officer of the WAC, in a phone interview on Tuesday.

Dizon was diagnosed with diabetes 22 years ago and had been on insulin medication since, Tuico said. He had been in and out of the hospital since 2011 after his health deteriorated.

The priest underwent dialysis before he suffered a cardiac arrest and slipped into a coma a day before he died.

Dizon is survived by two brothers and a sister.

His remains were brought to the San Roque Cathedral in Caloocan and were scheduled to be transferred to the WAC office in Rosario, Cavite, on Nov. 7 and to the Diocese of Imus, also in Cavite, on Nov. 8.

Interment will be on Nov. 11, at 9 a.m., at the Bishop’s House in Imus City.—With reports from Tina G. Santos in Manila and Inquirer Research