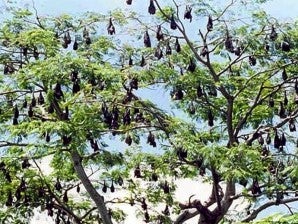 BATS hang on trees on Boracay Island to rest during daytime.

At dusk, just as darkness starts to cover the world-famous Boracay Island, thousands of creatures soar to the skies in perfect formation toward the Aklan mainland.

They will come home the next day, only to repeat the ritual in the afternoon.

Far from the powdery sand and crystal clear waters, the fruit bats are Boracay Island’s lesser-known treasures that are both an attraction for tourists and a focus of conservation efforts.

The northern hills of the 1,032-hectare island in Barangay Yapak are home to the bats, also known as Flying Foxes because they resemble miniature dogs with wings.

Conservationists have identified three bat species, including the Golden-Crowned Flying Fox (Aceradon jubatus), which is endemic to the Philippines but has been categorized as among the endangered species under the International Union for Conservation of Nature Red List.

The others are the Giant Fruit Bat (Pteropus vampyrus) and the Small Flying Fox (Pteropus hypomelanus).

Bats play a key role in the regeneration of trees and in preserving the fast-dwindling forest cover, according to the Boracay-based Friends of the Flying Foxes (FFF), a group of volunteers working for their conservation.

Over their flight route, they disperse seeds (they actually drop these while flying and eating), according to FFF president Julia Lervik. The seeds account for around 95 percent of forest regrowth on cleared land, according to the group.

Flying Foxes hang on tall trees in lowland forests and live in a colony. From their “roosting” sites, they go to the Aklan mainland at night to feed on fruits from forest trees and return early in the morning to sleep.

Watching thousands of flying bats during sunset has become one of Boracay’s attractions. But the island’s fast-paced and often unregulated development, and the influx of tourists and settlers have taken their toll on the creatures. 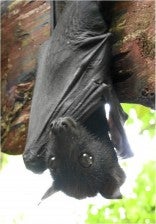 THESE fruit bats are called Flying Foxes because they resemble miniature dogs.

The bat population has plunged by 86 percent from 15,000 in 1988 to 2,000 in 2005, according to the latest count of the FFF and other conservation groups. The sharp decline has been blamed on habitat loss, human disturbance of the bats’ roosting area and hunting.

Since it was formed in 2002, the FFF has been campaigning for the preservation of the bats’ habitat and eliminating disturbances. It is composed of Boracay residents, wildlife specialists and conservationists, expatriates and tourists.

The group conducts research and education on bats and their habitat.

It was also at the forefront in forging agreements with property owners in establishing two 200-meter buffer zones around two roost sites. It was successful in pushing for the issuance of a barangay ordinance prohibiting the hunting of bats.

To ensure that the bats are not disturbed, the FFF has promoted guidelines in caving activities.

During the construction of the sprawling Shangri-La Boracay Resort and Spa in 2006, developers scrapped several villas from their development plan to create a bigger buffer zone or about 300 meters between the project site and the bats’ roosting area.

In coordination with the FFF, the resort designed a comprehensive wildlife protection plan and set up an Eco Center, which promotes interactive learning for the young on the need to protect endangered species on the island.

Although no count on the bat population was made recently, Lervik said the FFF observed an increase. “Their population has not returned to the 1988 count but we believe their numbers have stabilized. This is an encouraging indication,” she said.

The situation requires a continued and more aggressive campaign to eliminate all threats against the bats, Lervik said.

“Hopefully, we will see more of the bats flying every afternoon,” she said.

PHOTOS COURTESY OF FRIENDS OF THE FLYING FOXES