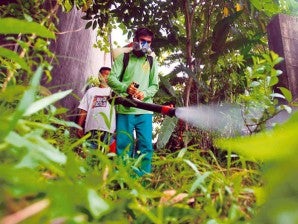 DAVAO CITY, Philippines — Floods and dirty surroundings were among the causes for the surge in dengue cases here during the first 10 months of the year, a Department of Health official in Southern Mindanao said Monday.

Mary Divine Hilario, chief of the DOH’s health education and information division, said the number of cases in this city was staggering.

Out of the 9,593 dengue cases posted region-wide as of October 30, Davao City accounted for 5,757 cases, Hilario said.

Thirty of the 60 deaths in Southern Mindanao were also from this city.

“These are mainly from the Buhangin District,” Hilario said.

Hilario attributed the thousands of dengue cases in the city to several reasons, “among them the lack of cleanliness drive, unpredictable weather condition and floods,” she said.

Hilario did not say how many dengue cases were reported in the city in the same period in 2012 but added that in the entire Southern Mindanao area, the 2012 figure from January to October was 8,412.