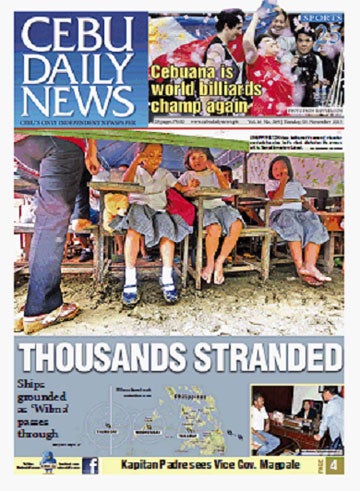 Over three thousand passengers returning to Cebu after the All Saints’ Day weekend were stranded in the ports of Bohol after the Coast Guard ordered the grounding of all sea-going vessels at noon yesterday because of tropical depression Wilma.

“It is part of our protocol. When there is a storm signal, we suspend vessel trips,” said Cmdr. William Melad, commander of the Philippine Coast Guard Cebu Station.

Ferries bound for Lapu-Lapu from the port of Cebu were allowed to sail as the areas were not covered by the storm signal. Melad said about four or six vessels were given clearance to set sail.

Seven vessels were affected by the grounding order in the port of Cebu while 14 were in Bohol’s ports.

Wilma made landfall midday yesterday in Tandag City, prompting state weathermen to place several areas in the Visayas, including southern Cebu, Bohol, and Mindanao under storm signal No. 1.

At 4 p.m., the low pressure area was observed 15 kilometers southwest of Tagbilaran City in Bohol embedded along the intertropical convergence zone (ITCZ), Pagasa said in its 24-hour weather forecast which was released at 5 p.m. yesterday.

The weather system brought severe thunderstorm to Metro Cebu, Aloguinsan, Pinamungahan and Asturias between 7 p.m. and 8 p.m. Power was cut at around 7 p.m in some areas.

Eclarino said they are verifying reports of a tornado (ipo-ipo) that hit areas in Lapu-Lapu and Mandaue cities.

The Mactan weather station monitored gustiness or strong winds of up to 78 kilometers per hour. It also monitored 24.2 millimeters of rain from 2 p.m. to 8 p.m. yesterday.

The strength of the gust last night was enough to uproot trees, tin roofs, and even move cars, Eclarino said.

A glass window in the Pagasa Mactan station was broken by the gust.

At the ports of Cebu and Bohol, passengers were stranded in terminals after the Coast Guard ordered the grounding of all ships as a safety precaution

Many passengers arrived early at the Tubigon port after they failed to take a vessel bound for Cebu on Sunday because of the surge of passengers.

Sarah Ricafort, an employee of the Tubigon Municipal Treasurer’s Office who was in charge of collecting terminal fees, said almost 2,000 people were already on queue by 10:30 a.m. until the grounding order was announced at noon.

Cousins Benie Lapore and Antonio Busalanon who came from Dagohoy town, said they would wait at the port to bolster their chances of getting on board the first trip out to Cebu where they will take another ferry to Surigao City and Panabo City in Davao del Norte.

James Bernaldez, 31, and Richard Gunday, both from Valencia town, said they are worried because their leave of absence in a shipyard in Consolacion was only up to Sunday.