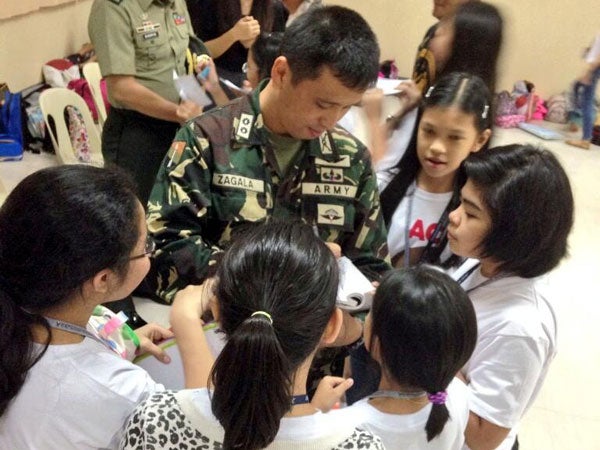 AFP Chief of Staff Gen. Emmanuel Bautista ordered Zagala to go to Zamboanga City in September to handle the public and media communication aspect of the military operations against Moro rebels threatening the city.

Little did Bautista know that his strategy would turn Zagala, a Special Forces airborne officer, into a celebrity.

Two weeks of media exposure resulted in the creation of a Facebook fan page by Zamboanga residents, the manufacture of T-shirts with Zagala’s face on them and photo opportunities for starstruck city residents.

Zagala also had gushing fans on Twitter, who congratulated him for his award yesterday.

“LTC Zagala did an excellent job bridging the @TeamAFP and the civilian community during the crisis. As to why he deserves the fans’ club, he has the charm and the looks too. That’s how an Army wife will say it,” tweeted @PinkOliveDrab, also a military wife.

Zagala is the son of the late Army Chief Maj. Gen. Rafael Zagala. He and his wife, Nenita, have two sons.

A graduate of the Army’s Officers’ Candidate School, Zagala was astonished by the public’s response to him while he was just doing, he said, the task assigned to him by his commander.

On his award, Zagala said: “I was more on the crisis and strategic communications of the military to show the bigger audience that the threat was contained within the city.

“I tried to give timely information without compromising the troops’ security and our mission. Maybe that’s why I was given the award,” he said.

Ironically, none of yesterday’s awardees were from Zamboanga City  or from Basilan province.

The first responders in the Zamboanga siege were actually soldiers from the 32nd Infantry Battalion, who were on a “retraining program” in Zamboanga, and the 7th Scout Ranger Company from Basilan.

Lt. Gen. Rey Ardo, chief of the Western Mindanao Command, said he learned of the award ceremony only on Sunday.

Col. Johnson Jemar Aseron of the 32nd Infantry Battalion and Capt. Arvin Llenaresas of the 7th Scout Ranger Company said they were not informed either.

“It’s OK if we were not recognized. If we were recognized, we would want it on Dec. 21, during AFP Day,” Aseron said.

“We respect the judgment of our superiors. In the Army, whoever is recognized, is considered an honor for all of us,” he added.

Llenaresas said he received no prior advice, “not even a radio message.” But he said he did not mind.

“What’s important is we did our best to secure Zamboanga and gave the place back to its people,” he said.

Zamboanga City Mayor Maria Isabelle Climaco-Salazar said she would look into why the troops who responded first to the crisis and were the last to leave the city were not recognized during the awards ceremony.

“I will raise this matter with General Bautista,” she said. With a report from Julie S. Alipala, Inquirer Mindanao