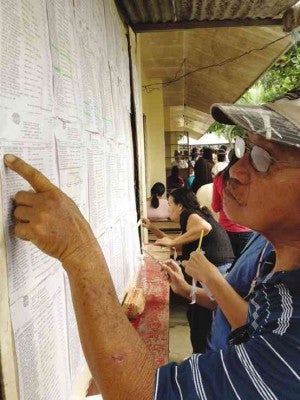 A VOTER searches for his name on the voters’ list, which, despite claims to having been cleansed, still contains dead people’s names. JULIE ALIPALA / INQUIRER MINDANAO

COTABATO CITY—Teachers who served on the outskirts of the city during the barangay (village) elections on Oct. 28 have started to speak up on how the political exercise was filled with anomalies.

One of them agreed to be quoted by the Inquirer on various incidents that took place in her assigned precinct on the condition she would be identified simply as “Ma’am Clara.”

Ma’am Clara described the village she served as a place where even the dead and minors cast their votes.

Other teachers recounted experiencing the same in their respective precincts.

“How can we resist when they (minors) were accompanied by armed men. The armed men would regularly peek inside the classroom to make sure they were voting,” she said.

Ma’am Clara also recounted an encounter with one voter, who insisted on voting using the name of his already deceased grandfather. The name of the man’s grandfather was still on the list of voters.

“As the man was insistent, we referred him to the school principal, but the principal got a dressing down from the voter. The principal was badmouthed. We shut up and just allowed him to do what he wanted,” said Ma’am Clara, who chaired the board of election tellers in the particular village.

She also confirmed to have witnessed rampant vote-buying activities inside her precinct.

“The moment a voter comes in, poll watchers would also rush in and hand out money,” Ma’am Clara said, although she was not able to confirm how much money was given to each voter.

She said as much as they wanted to prevent these irregularities, they were simply afraid for their safety and did not bother to inform policemen and soldiers posted outside the precinct because of this concern.

“We just shut up or turned a blind eye [on it] to come out alive,” Ma’am Clara said.

She said their fears about their safety became real when a rifle grenade exploded just beside the voting precinct as the counting began. No one was reported hurt in the incident.

“We were scared to death but we could not leave because we had to finish the counting,” Ma’am Clara said.

She described the village elections as “worse than the regular elections.”

Benjie Valbuena, national president of the Alliance of Concerned Teachers (ACT), has urged the Commission on Elections  (Comelec) to investigate the claims of irregularity and prosecute those responsible for the violence that marred the elections.

He also urged the Comelec to run after those identified to have harassed the teachers performing election duties.

“Comelec must do this to set a precedent and as a warning for the candidates not to intervene in the election tasks of the teachers,” Valbuena said in a statement.

Valbuena also lamented the fact that winners had already been proclaimed but those who served in the polls have yet to receive their honorarium.

“It has always been like this, teachers suffer the pain of waiting for compensation for serving in the elections,” said Jhonny Balawag, administrative officer of the Cotabato City Schools Division.

At least 1,000 teachers here served in the Oct. 28 village elections and were supposed to receive P2,000 each from the Comelec. The city government was supposed to give them additional P500.

Ma’am Clara said the honorarium was a big help to the teachers but “the amount will never compensate for the risks we took.”

Meanwhile, the declaration of winners in the recent polls had not stopped poll-related violence from taking place.

In Kidapawan City, a newly elected village council member was killed while his companion was critically wounded during a shooting incident on All Saints’ Day in Barangay Malinan there.

Ajero said Macrohom was driving his motorcycle with Penio to Malinan proper from his house when they were fired upon by one of two men riding on another motorbike around 9 a.m.

“I am deeply saddened by the death of Macrohom and the wounding of Penio,” Evangelista said in a statement.

“I am crying for justice for Macrohom,” he said, adding that he had ordered the police to bring the perpetrators behind bars.

He also vowed to extend assistance to the family of the deceased, and medical assistance to his wounded companion. Edwin Fernandez, Inquirer Mindanao