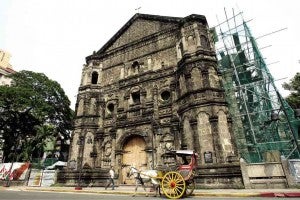 When a significant number of human bones and ceramics were unearthed during the ongoing restoration of Malate Catholic Church in Manila, heritage conservationists called archaeologists in to sift through the materials and supervise subsequent diggings.

The resulting collection, including fragments of Chinese Ching-Pai porcelain developed in the 10th century and ceramics bearing the mark of late 1800s British manufacturers, earned the church area the unexpected distinction of being the first archaeological site ever found in that district.

“A lot of what we know about Malate is based on written words. It’s always nice to have the material evidence, the actual materials that were created, developed and manufactured during that time,” archaeologist Eliza Romualdez-Valtos told the Inquirer during an exhibit at the church in late October.

The Heritage Consultancy Group led by Valtos conducted rescue archaeology, or the salvage of materials being dug up in the course of land development, as opposed to regular archaeology which actively looks for answers to research questions. 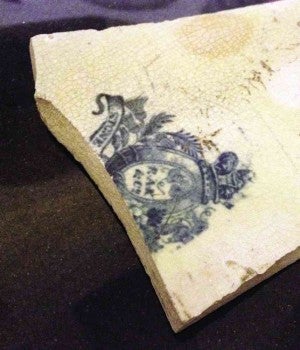 “Our accession number (provided by the National Museum) for the site code is T1, meaning this is the first archaeological site in Malate,” Valtos said.

Further analysis will be conducted as the archaeologists have just finished the recovery, an effort that began about five months ago.

Architect Mico Manalo, project director of Escuela Taller Intramuros, which supervises the Malate Church restoration, sought the help of Valtos’ group when the artifacts surfaced as diggings were being done to lay down water pipes and check the integrity of the church’s foundation.

“We were really surprised and frightened because we are not suited to handle these sensitive materials,” Manalo said. “When the archaeologists came in, every time we dig they’re there, and whatever came out of the ground, they gave it a thorough look.” 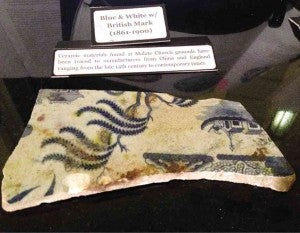 THE MALATE Church archeological site also yielded pieces of earthenware and porcelain, including one with designs believed to be of 10th century China.

The five-year program to restore Malate Church, also known as the Our Lady of Remedies Parish, is now on its third year. For funding, parish priest Fr. John Leydon came up with what he called a “5-5-5 program” to raise P5 million for five months each year for five years.

The restoration project gained more urgency with the massive Oct. 15 earthquake that hit Central Visayas and left over 200 people dead and a large swath of devastation that included toppled centuries-old churches.

“The bulk of the work involves putting back the old plaster of the façade, replacing the cement with lime,” Manalo said.

Groundwater cannot evaporate through cement, causing the material to crumble, whereas lime is a more porous material, he explained.

Manalo said interior repairs were still needed as there were cracks in the arches and the paint on some areas had peeled off, indicating trapped moisture. 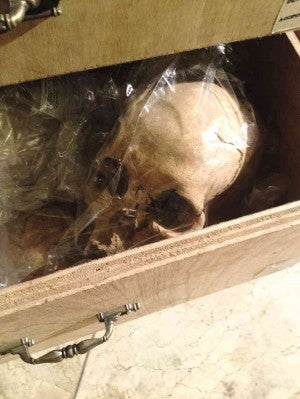 A HUMAN skull from the Malate dig
ERIKA SAULER

“The community is alive. And it’s not just about the building, it’s what happens inside the building,” he said.

Malate Church was constructed as an Augustinian friar building in 1588. It has been rebuilt several times after being damaged by earthquakes in 1645 and 1863, and then by World War II. The Columban Missionaries have taken over parish work in Malate Church since 1928.

“The current work in Malate gives us a window to an earlier time in Malate history,” according to Victor Paz, head of the University of the Philippines Archaeological Studies Program.

“Malate may have been a river delta island with a settlement dating back to more than a thousand years. It has the potential to contribute to a better understanding of the early history of Manila,” Paz said.

Read Next
QC rites start countdown to massacre anniversary
EDITORS' PICK
Heads may roll at BOC, says Palace if sugar smugglers are allowed to use recycled import permits
Palace: Biggest supermarkets in PH commit to sell sugar at P70 per kilo
vivo brings to the Philippines a powerful smartphone with a slimmer body, the vivo Y02s for only PHP 6,499
What to watch out for when selecting a video surveillance solution
House energy committee chair Arroyo bats for cheap electricity
DOH reports increase in daily COVID-19 deaths, mostly unvaxxed
MOST READ
DepEd to give teachers P5K cash allowance within first week of classes
GSIS cool to idea of lowering retirement age in PH
Alyssa Valdez to miss Creamline’s AVC Cup campaign
DOJ indicts bank officer in $2.1 billion Wirecard fiasco
Don't miss out on the latest news and information.