No zombies, devils on Halloween for Dagupan City kids 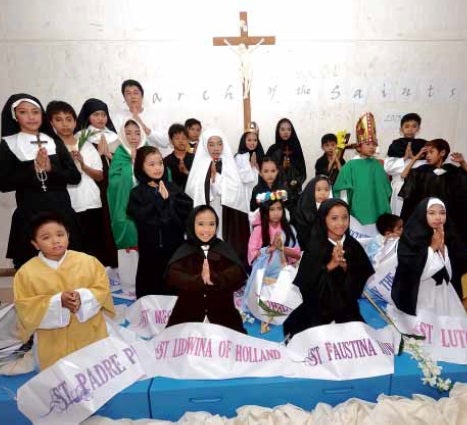 INSTEAD of witches and ghouls, children in Dagupan dressed as the VirginMary, nuns and bishops “to bring back the true spirit of Halloween,” according to parish priest Fr. Alvin Gerald Platon. CONTRIBUTED PHOTOS BY WILLIE LOMIBAO

A few paces ahead of him walked a boy in a brown habit, carrying a staff in his right hand and holding a leash with a dog in the other. He was portraying a French saint, San Roque.

The two were among the 200 children, teens and young adults who came dressed in vestments and other saintly garments to participate in the “March of Saints,” the Catholic Church’s version of the Halloween celebration here on Wednesday. No one came dressed in a scary Halloween costume.

“This is the first time [we are doing this here]. As years go by, I hope we will eventually develop this into a tradition. We hope to bring back the sanctity, the sacredness of All Saints’ Day,” said Fr. Alvin Gerald Platon, a team ministry member at St. John the Evangelist parish here.

Platon said the Halloween celebration that featured scary creatures and devils was a pagan tradition.

“Instead of depicting scary creatures in the children’s celebration, why not the saints. Because first and foremost, the monsters are fictitious creatures. The saints are real people who once lived. They should be our young people’s role models,” he said.

The celebration began with a film-showing on the lives of saints. The participants then marched from the church to the city’s business district with the image of Our Lady of Manaoag mounted on a pickup. On returning to the church, a Mass was held.

In his homily, Platon said that dressing up children as zombies and devils and other scary creatures for Halloween gave the children the impression that evil spirits were friendly and that there was nothing wrong with imitating them or keeping their company.

“We have perhaps sanitized our sensibilities that all these frightening creatures are our friends. That a kapre (mythical tree creature that smokes a giant pipe) can be a friend, that the devil can be a friend. But that’s not the truth. We should never be friends with the devil,” Platon said.

He said Halloween should be a celebration that honors blessed people. The word “hallow,” he added, meant blessed.

“How can a tikbalang (fictional half-man half-horse) or a zombie be blessed?” Platon said.

He said that by holding the March of Saints here, he hoped other parishes in the province would follow suit.

“We have to bring back the original celebration of All Hallows Eve, a celebration of all saints because the next day will be All Saints’ Day. That’s why we have to replace the tikbalang, kapre, zombies and other scary creatures with the saints of God,” he said.

He said the Catholic Church now had thousands of saints that included Filipinos like Lorenzo Ruiz and Pedro Calungsod.

Recently, Pope Francis canonized 813 saints in one ceremony, while Pope John Paul II canonized about 400 in his 27 years as Pope.

“The Church wants to propagate the lives of the saints because they are our guides for our Christian living,” Platon said. “Hopefully, our young people will eventually understand. We cannot do that in one celebration but hopefully, as the years go by, if they want to depict a certain saint every year, we can ask them to research or give them catechesis on the life of the saints.”