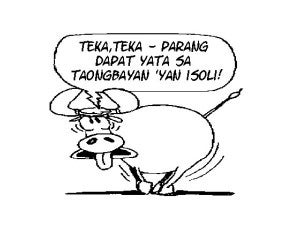 Charged with plunder in the Office of the Ombudsman, the Cavite lawmaker has filed a damage suit against two whistle-blowers and five other people demanding that they return P502 million of his pork barrel that was supposedly given them, according to court documents obtained by the Inquirer.

The four officers were identified in Revilla’s lawsuit as Jocelyn Piorato, Nemesio Pablo, Petronilla Balmaceda and Evelyn de Leon, plus a John Doe.

Besides Revilla, 37 others have been charged either with plunder or malversation, bribery and/or graft and corrupt practices.

Among those charged with plunder with Revilla are Sen. Juan Ponce Enrile and Sen. Jose “Jinggoy” Ejercito Estrada.

In his suit, Revilla asked the court to nullify the allegations against him in the documents from the Commission on Audit (COA). These documents pertained to Revilla’s supposed use of his Priority Development Assistance Fund (PDAF), or pork barrel.

He described the documents as “fictitious.”

The COA sent a letter to Revilla in July 2011 asking him to confirm whether the signatures appearing on his PDAF documents were his or that of his senior staff, Richard Cambe.

Revilla said that based on a handwriting expert, his and Cambe’s signatures were forged.

“Thus, the PDAF documents are absolutely simulated or fictitious and should be declared null and void,” he said.

Cambe has been identified by whistle-blowers, led by Luy, as the one supposedly designated by Revilla to conduct transactions for him with the NGOs controlled by Napoles.

Revilla said the COA report, which he claimed was based on bogus documents, stated that he allocated P502.89 million of his pork barrel during the period 2007-2009 to NGOs headed by the respondents.

“The defendants should be ordered to account for and return the amounts they received through the use of fictitious PDAF documents to the government.”

Revilla also asked each of the respondents to pay moral damages of not less than P100,000 for exposing him to probable criminal prosecution.

He also accused them of exposing him to public hatred, condemnation and dishonor for their “wanton, reckless and malevolent acts and omissions, particularly in illegally and unlawfully maliciously forging the signatures of Revilla and his senior staff Richard Cambe.”

The Senate blue ribbon committee has launched an inquiry into the controversy.