MANILA, Philippines – Residents of the country’s upper regions should brace for a rough and stormy All Saints Day as “Vinta,” now a typhoon, struck northern Luzon on Thursday, state forecasters said. 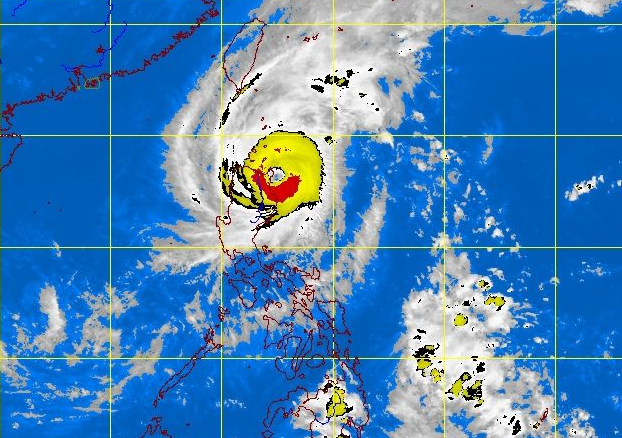 The weather bureau raised storm alerts in almost 20 provinces in northern Luzon in anticipation of strong winds and rains spawned by the disturbance.

As of 4 p.m. Thursday, the eye of the typhoon was observed some 110 kilometers east-southeast of Aparri, Cagayan, Pagasa said.

Vinta was packing peak winds of 130 kilometers per hour (kph) near the center and gustiness of up to 160 kph, and was forecast to move west-northwest at 22 kph.

But the typhoon would not stay long and be out of the Philippine area of responsibility by Friday afternoon, Pagasa predicted. It will have been located some 280 kilometers west of Laoag City by then, it added.

Signal No. 3, indicating 101-185 kph winds in at least 18 hours, was hoisted over Cagayan, including the Calayan and Babuyan groups of islands, Apayao, and Ilocos Norte.

Signal No. 2 (61-100 kph winds in at least 24 hours) was raised in the Batanes group of islands, Abra, Kalinga, Ilocos Sur, Mt. Province, and Isabela.

Signal No. 1 (30 to 60 kph winds in at least 36 hours) was hoisted over La Union, Benguet, Ifugao, Nueva Vizcaya, Quirino, Aurora, and Pangasinan.

The rest of Ilocos region and Cordillera, the provinces of Aurora and Nueva Ecija will have rains and gusty winds with moderate to rough seas.

“Metro Manila and the rest of Luzon will have cloudy skies with light to moderate rain showers and thunderstorms,” Pagasa said.

The rest of the country, Visayas and Mindanao, will see generally fair weather, except for isolated rain showers or thunderstorms mostly in the afternoon or evening, it said.

The typhoon will bring moderate to heavy rainfall, at 5-15 millimeters per hour, within its 500-kilometer diameter, Pagasa said.

The weather bureau alerted the areas under storm signals to possible flash floods and landslides. Moreover, coastal areas under Storm Signal Nos. 3 and 2 were warned about possible storm surges.

Sea travel is risky in the northern and eastern seaboards of Luzon, Pagasa said.

Signal No. 1 up in 3 provinces as ‘Vinta’ intensifies into storm—Pagasa

‘Vinta’ to make it a rainy holiday