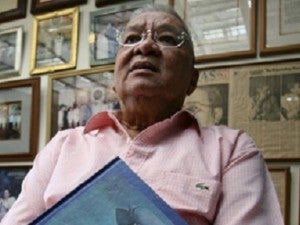 MANILA, Philippines—Former Chief Justice Andres Narvasa passed away Thursday morning at 6:05, according to a tweet posted by the Supreme Court. He was 84.

The former high court chief died of complications due to pneumonia. His remains will be at Mt. Carmel Church in New Manila.

Narvasa was appointed as the 112th Associate Justice of the Supreme Court on April 11, 1986. He also served as the 19th Chief Justice of the Supreme Court, from Dec. 1, 1991 to Nov. 30, 1998, after he was appointed by the late President Corazon Aquino. After his retirement, former President Joseph Estrada appointed him as chairman of the Preparatory Commission for Constitutional Reform.

The late President Ferdinand Marcos appointed him as general counsel of the Agrava Fact Finding Commission, which was tasked to investigate the circumstances surrounding the 1983 assassination of Sen. Benigno Aquino Jr., the father of President Benigno Aquino III.

The Supreme Court has lost another legal luminary with the passing of Chief Justice Andres Narvasa,” acting Chief Justice Presbitero Velasco said in a statement Thursday.

Calling Narvasa an “agent of change,” he said Narvasa instituted reforms in court procedures and constantly evaluating the court machinery to see how it could be improved.

“As Chief Justice, he led the Court by example displaying integrity and wisdom and serving as a model for justices and judges to emulate. Even as he loomed large in life, his presence remains with us still, in his legacy of judicial reform and excellence,” Velasco said.

Narvasa was succeeded as Chief Justice by Hilario Davide Jr.