‘Lettering boys’ back in cemeteries 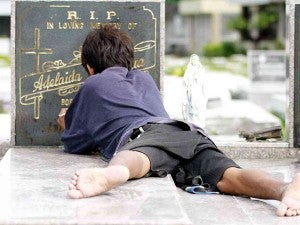 A YOUNG boy paints for a fee in a cemetery in Lucena City. DELFIN T. MALLARI JR.

Carrying the tools of their trade – paint, brush, scraper, rags and stick broom – a group of young boys stroll around three private cemeteries on the outskirts of the city to offer “clean and paint” services for a fee.

“Painting and lettering have been our annual source of ‘good time money’ during All Saints’ Day,” says Lito, 14. He sits atop a tomb as he waits for a “client.”

Lito, a high school sophomore, points to two buddies, Noel and Tom, who were hollering “lettering! lettering!” to approaching visitors. The boys charge P100 to painting the letters, numbers and designs engraved on marble epitaphs and an extra P300 to clean and apply a fresh coat of paint on the entire tomb.

“But we’re willing to do the whole package for P350 to P300 or maybe less. It all depends on the mood of our stomach,” Lito says with a laugh.

Antonia Gregorio, a widow, calls them “lettering boys.” She says they have been cleaning the grave of her husband for the past three years.

“They are efficient despite their young age,” she says while holding a can of paint and a brush at a stall near the gate of the cemetery where she would buy candles.

“My lettering boys just do the cleaning and painting job. I buy the paint myself to ensure good and lasting quality,” she says. She hands over the materials to the four “handymen” waiting at the gate.

Lito says his group earns an average of P1,000 a day if the weather is fine. They usually start their job four days before Nov. 1, All Saints’ Day. They earned more than P3,000 on All Souls’ Day, Nov. 2, last year.

“Noel is lucky. Last year, he also received a brand new, original bull cap and shirt from his regular client who has a son in Japan. Plus a few hundred pesos,” Lito says.

Titong, the leader of another group of “lettering boys,” plies the trade at the public cemetery because of stiff competition at the private cemeteries.

“Besides, clients at the private cemeteries are too demanding. Here in the public cemetery, they are more considerate, with some paying more for our services,” Titong adds.

Lettering boys in both public and private cemeteries charge the same rate. The difference is based on the scope of work and size of painting area.

Lito says he and his buddies spend their money playing video games, watching movies, and eating cheeseburgers and junk food at a nearby giant mall.

For Titong, who is a high school junior, the money he makes will augment the income of his father, a fish worker in the coastal village of Dalahican.

“I will just leave a small amount for myself for my school allowance,” he says.