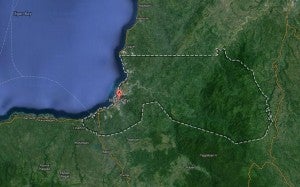 ILIGAN CITY, Philippines — A police officer assigned as part of the security team for election officials here was killed after a man who allegedly resented his defeat in Monday’s race for the village chairman of Barangay Rogongon, set the local office of the Commission on Elections (Comelec) on fire, early morning Wednesday.

He said Conto had admitted lobbing a molotov bomb into the Comelec office and claimed his two other brothers were with him.

The fire immediately gobbled up the building and nearby stalls of sidewalk vendors, he said.

He estimated the damage to property at about P800,000, which included the worth of equipment razed by the fire.

Borinaga, who would have turned 34 on Wednesday and  even had an advance birthday celebration inside the Comelec office on Tuesday evening because his duty would have ended at 9 a.m. the following day, Barrido said.

Asked about Conto’s claim he was a defeated candidate, Barrido said she was still verifying that information because all the local Comelec’s records in relation to the recently concluded polls had burned along with the computers and other equipment.

Inspector Robert Delos Reyes of the city police office said Conto was temporarily being held at the police holding office, as of Wednesday, while an arson case was being prepared against him.

He said the police were also investigating the suspect’s claim that he had his two brothers with him when he threw the molotov bomb that started the Comelec fire.

Conto told reporters he got mad at Comelec officials because he did not win as chairman of his village.

Reyes said the police were also thinking of having Conto undergo a psychiatric test to determine if he was sane or not.

In Digos City, the police said the barangay tanod (village watchman) injured in the pre-election shooting and explosion that targeted the village hall in Barangay Matti there had died of complications at the hospital he was being treated in.

The attack on the village hall took place at around the same time several men attempted to burn a school building in barangays Zone 3 and San Jose, also in Digos.

Manalang said the attacks were election-related.

Shortly before polling precincts opened on Monday, armed men also lobbed a fragmentation grenade on the house of Davao del Sur provincial prosecutor Artemio Tajon, a known supporter of the proposal to divide Davao del Sur and for the creation of the second province of Davao Occidental.

Tajon, who has survived the grenade attack with his family – also had an earlier brush with some politicians, who forced the resignation of members of the board of the Davao del Sur Electric Coop., to which, he was a member of so they can be replaced with their own men.

The police said they were considering all angles in the attack on Tajon, including his work as government prosecutor, but could not make conclusion if it was politically motivated or not.

Critical period of polls is during closing of precincts, winners’ proclamation

Read Next
Gov’t lawyers told to answer plea against DAP
EDITORS' PICK
What to watch out for when selecting a video surveillance solution
Palace warns sugar hoarders after raid on Pampanga warehouse
Metro Manila’s COVID-19 cases on downward trend, but surge not over — OCTA
Unleash the photographer in you this World Photography Day with vivo smartphones
House energy committee chair Arroyo bats for cheap electricity
Look Through: The fate of impounded stray dogs
MOST READ
WATCH: Rick Astley re-creates ‘Never Gonna Give You Up’ music video 35 years later
Man abducted in Batangas gasoline station, found dead in Quezon
DOJ indicts bank officer in $2.1 billion Wirecard fiasco
PNP bars US legislators’ visit to De Lima due to lack of authority from court
Don't miss out on the latest news and information.