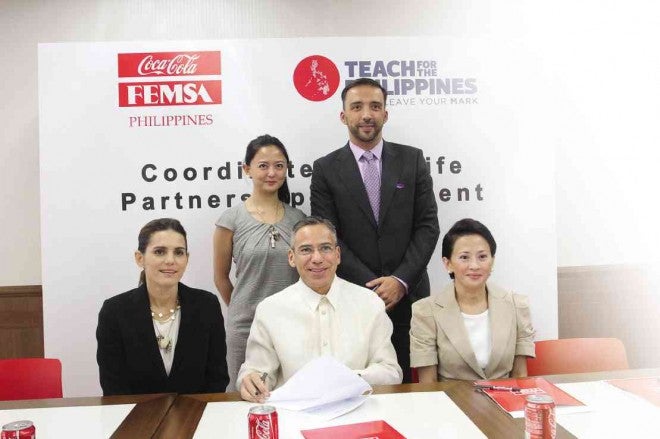 Leading beverage company Coca-Cola Femsa Philipines has partnered with the nongovernment organization Teach for the Philippines (TFTP) in a program that aims to provide young people  the tools that will help them make the right decisions early in life.

Under a memorandum of agreement, TFTP will incorporate in its training program Coca-Cola Femsa’s Coordinates for Life (CFL) campaign.

Juan Dominguez, Coca-Cola Femsa corporate affairs director, said CFL, which targeted young people aged 10-18, was a package of programs that aimed to develop the right knowledge, attitudes and skills, formed through the beneficiaries’ own experiences and approaches to everyday situations. It would be a joint endeavor of teachers, parents and other concerned individuals.

Clarissa Delgado, TFTP chief operating officer and cofounder, allayed fears that overburdened public school teachers would be saddled with yet another subject to teach.

“Teachers would be trained to incorporate [CFL] in [existing subjects],” she said. Although CFL could also be offered as a separate program, she said they expected the values and skills to be integrated in the teaching of all core curricular subjects like reading, mathematics, science and social studies.

TFTP, a private sector initiative, invites some of the country’s best and brightest young professionals to spend at least two years of their lives supplementing and complementing instruction in public schools by becoming classroom teachers. It also conducts training programs for public school teachers.

In explaining the rationale behind CFL, Dominguez pointed out that choices made now would  have a significant impact on kids’ future.

He said kids could, for instance, face values crisis like dishonesty and lack of attachment to rules. They had to cope with complex interpersonal relationships that could make them victims of bullying and/or violence or turn them into the victimizers.

CFL would make parents, teachers, other mentors, individuals who influenced the young, like other relatives and friends, life coaches, helping vulnerable youngsters acquire the values and resources to live and face life’s challenges.

Dominguez said CFL would provide the young “dynamic responses to new problems.” It recognized that learning would be more significant if based on “concrete experiences, due to challenging situations; reflection, analysis and conclusion (as a result of those experiences); systematic repetition of teaching patterns and experiences shared with their peers.”

The skills and values would make beneficiaries educationally proficient and enhance their competitiveness in an increasingly globalized economy.

Dominguez underscored the fact that under CFL, learning was not confined to the classroom. The home, the community and society, in general, would participate in giving children the tools they would need in adulthood.

As part of the CFL initiative, Coca-Cola Femsa would help provide workshop materials for teachers, parents and communities to guide them in teaching children, he said.

Dominguez stressed the program was not only focused on intervention for students but also teachers. He said they had forged a “perfect partnership” with TFTP.

He added that teacher training on CFL would start early next year. 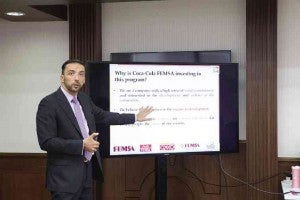 Margarita Delgado, TFTP president and cofounder, emphasized the significance of the partnership, as she pointed out that there were several “challenges in the public  education system” like poverty, proficiency of teachers, etc. She said TFTP had so far some 50 volunteers in 10 public schools in Quezon City, proving ground for the initiative.

Dominguez added, “Many teachers are willing to teach but they do not have the materials and the tools.” He said CFL would “link values to subjects,  like how historical events are affected by certain decisions [made based on individuals’ particular values and attitudes].”

Dominguez said Coca-Cola Femsa recognized that education would promote development. “[We also] believe values play a strong role in the future of a country.”

Clarissa underscored the importance of teachers’ cooperation for the success of CFL. She described teachers as the “biggest believers and performers of this kind of program.”

The teachers were also in a position to influence parents to get into the program, as they met with the latter regularly or did home visits, she said.

Dominguez said they hoped that, eventually, they would have a program they could present to the Department of Education (DepEd) for replication across the country. They envisioned the training of more teachers to incorporate the values in their teaching.

Clarissa said TFTP’s volunteer teachers also had to undergo its Summer Institute course to be considered fellows. Volunteer teachers were paid the salary of a Teacher 1 in the  DepEd’s wage structure.

She said, through an arrangement with Ateneo de Manila University, a volunteer would earn nine units toward a master’s degree. She said they hoped to get more academic credits so volunteers could take the licensure examination for teachers, if they wished.

The Philippines is the fifth  country to implement CFL and the first outside Latin America. Launched in Mexico and Argentina in 2011, the program was later brought to Brazil and Colombia.

So far, the program has benefited over 28,000 children and young adults and some 3,410 educators.