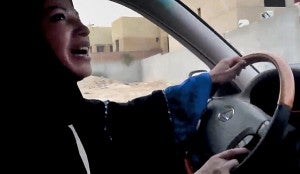 A Saudi Arabian woman drives a car as part of a campaign to defy Saudi Arabia’s ban on women driving, in Riyadh, Saudi Arabia in this June 2011 file image made from video released by Change.org. AP

RIYADH, Saudi Arabia—Activists have posted a video of a woman in Saudi Arabia driving a car, as their campaign urging women in the ultraconservative kingdom to defy a ban on getting behind the wheel kicks off.

A video posted Saturday on the official Arabic YouTube account of the driving campaign shows a woman identified as May Al Sawyan driving in Riyadh. She wears sunglasses and her hair is covered by the traditional black headscarf worn by Saudi women, but her face is otherwise visible.

In the run-up to the campaign, police warned that anyone disturbing public order would be dealt with forcefully. Ultraconservative clerics and have also warned against defying the country’s driving ban on women.

The campaign for women to drive is a rare show of defiance in the kingdom.