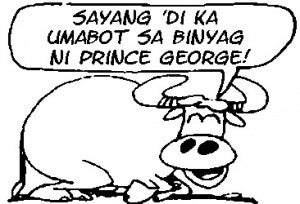 Presidential spokesperson Edwin Lacierda might get a chance to enjoy some fresh air in London next week, as Secretary Herminio Coloma takes a more prominent role at the regular press briefings in Malacañang, Palace officials said.

Coloma will be sharing with deputy presidential spokesperson Abigail Valte the responsibility of briefing the media on President Aquino’s “programs and messages,” under changes in the Presidential Communications Operations Office (PCOO) that, Coloma said, had the blessing of Malacañang.

“Secretary Coloma and I will be sharing the days (when) the briefings (become) necessary,” Valte said.  “You won’t see (Lacierda) next week,” she added.

Lacierda is flying to London to attend the “Open Governance Partnership Annual Summit” next week.

Since Tuesday, Coloma has joined the rotation of spokespersons tasked to regularly brief the members of the Malacañang Press Corps (MPC), a change that, he said, was cleared with Mr. Aquino himself.

“All our actions are in accordance with the President’s guidance and direction. We work together to communicate to our people the President’s key programs and messages in the most effective manner,” Coloma said.

He added, however, that he had “initiated discussions with Secretary Lacierda and Undersecretary Valte regarding the (daily) schedule of press briefings and my participation in such briefings.”

Lacierda and Valte confirmed that it was Coloma who had volunteered to join the rotation of presidential spokespersons, and that they were “more than happy to accommodate” him.

“Secretary Coloma asked us if he can do alternate briefings with me and Abi (Valte),” Lacierda said. “Since we’ve been doing this for more than three years (now), we were more than happy to accommodate him as this frees (up) our schedule to do other work, like our daily meetings with the President and other government officials and stakeholders,” he added.

“In fact, I decided to give him (the) Tuesday (and) Thursday (press briefings) and the Sunday radio briefing,” Lacierda said.

Under the old setup, Lacierda faced the MPC three times a week, on Mondays, Wednesdays and Thursdays.  Valte meanwhile conducted the briefings on Tuesdays and Fridays, and handled the weekend radio interviews.

Coloma will now take over the MPC briefings on Tuesdays, Thursdays and Sundays, with Lacierda handling it on Mondays and Wednesdays, and Valte, on Fridays and Saturdays.

Lacierda also showed a text message from Coloma that read: “Hi Edwin and Abi, if OK with you, I can do MPC briefing starting tomorrow on alternate basis with either of you. Please let me know. Thanks.”

Coloma confirmed sending the message to Lacierda and that his actions were based on President Aquino’s instructions.

The Inquirer learned that Coloma had met with Mr. Aquino and Executive Secretary Paquito Ochoa before the changes took effect this week.

At a briefing on Friday, Valte welcomed the change, saying it “will allow (them) more time for other responsibilities we’ve been tasked with.”

Valte said that apart from President Aquino requiring them to be present in his briefings, “other departments, agencies and bureaus (ask our) help in their communication efforts, as well as other special projects.”

The presidential spokespersons were also part of all the Cabinet clusters, she added.

Valte said the changes in the Communications Group were “actually not (from) the President.”

“In fact, when Secretary Sonny (Coloma) texted us and volunteered to go on rotation, we told the President. We said, ‘Sir, Secretary Sonny volunteered.’ And (Mr. Aquino) said, ‘OK. At least, you know, you have time off.’ That’s what he said—you (will) have time to breathe.”

Despite the new arrangement and his more prominent role in the PCOO, Coloma denied that he was now the official mouthpiece of the administration.

“There’s only one communications team of the President, and I am part of that group. We are all pitching in to enhance the overall communication effort,” he said.

As chief of the PCOO, Coloma presides over the official media machinery of the government, which includes Radyo ng Bayan and its nationwide affiliates, PTV4, IBC 13 and the Philippine Information Agency.