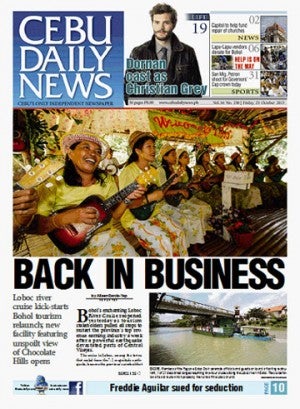 The cruise in Loboc, among the towns that reeled from the 7.2 magnitude earthquake, became the province’s symbol that Boholanos are getting back on their feet.

Loboc Mayor Helen Allaba said the whole town was happy the river cruise was back because it provides livelihood for at least 300 local residents.

“We have 21 floating restaurants run be four operators. Without this , the people earn nothing for their families,” she said.

Before the quake, an average of 1,000 tourists took the cruise each day. They pay P450 for a relaxing ride and lunch.

The roads from Tagbilaran City to Carmen town via Corella to see the Chocolate Hills from a new viewing deck are open to light vehicles.

Rowena Montecillo, DOT regional director, said the decision to reopen the Loboc river cruise was strategic because tour operators include it as a “must see” destination in the region.

“That is why it is really important to resume operations if we want to bring back tourists to Bohol,” she said. “People can still enjoy Bohol with its tarsiers and river cruises. What we’ve lost are the old churches for now.”

At yesterday’s relaunch, about a hundred local and foreign tourists boarded two barges that serve as floating restaurants.

A third barge carried a DOT group, including local officials, relief campaigners and the media.

The motorized vessels followed their usual route passing by the quake- ruined Loboc church until the cruise reaches a mini-waterfalls and turns around.

They were serenaded by the Fogcave Balsa Choir who performed folk and pop songs and dances.

Emily Avila, 34, a choir member, said that while they mourn for the lives lost, they have to move on.

“When the river cruise was shut down, we were just relying on relief goods for our sustenance. We didn’t have anything to do,” she said in Bisaya.

Before the calamity. each of the 50 choir members would earn at least P100 a day from tips given by tourists, she said.

Megan Tac-an, the youngest choir member at 8, was among those who gave impromptu “tinikling” dance lessons to guests.

“Nalipay ko kay nabalik na jud mi (I’m happy because we’re finally back),” she said when guests asked her how she felt.

The spot offers a view of the unspoilt portion of the famed geological formation. It had its soft opening in April and is set to be formally opened to the pubic in December.

Ging Velasco of Camanayon Hill Development Corp., which owns the 4-hectare tourist facility, said the Oct. 15 earthquake prompted them to advance the opening by two months.

The old viewing deck made of concrete was destroyed by the earthquake.

The new one in Buenos Aires is also reached by a flight of stairs but has a natural appeal with its banisters and 248 steps made of wood and indigenous materials.

Alona Beach Community Association president David Bailli said it is important for people to know that tourism in Bohol is still very much alive.

“We’re here to give our support. We need to bring them back. Operations in Panglao are not quite back to normal but guests still can enjoy all the beach packages,” he said.

Bailli said 65 percent of Bohol’s tourists are domestic travellers, who are less adventurous than foreign counterparts.

“Sadly we had cancellations from everyone. This (reopening) will signal to the tourists especially the domestic travellers who are our biggest market that tourism is back,” he said.

Bailli said that while some parts of Bohol are impassable due to damaged bridges and roads, the province has a good network of roads where alternative routes can be plotted.

Two nights after the killer temblor struck, members of the famed Loboc Children’s Choir appeared on TV Patrol and sang “The Prayer” before the ruins of the St. Peter the Apostle parish church.

The over three-minute TV exposure galvanized the nation, including Filipinos abroad, to action. Help started pouring in the next day. /Aileen Garcia-Yap, Reporter