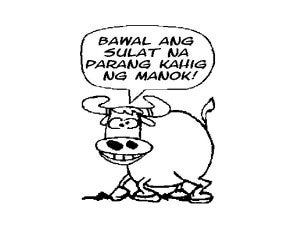 MANILA, Philippines—If your handwriting is like that of a doctor

issuing a prescription to his patient, there’s a pretty good chance your vote in Monday’s barangay (village) elections will be voided.

The Commission on Elections (Comelec) on Thursday reminded voters to write legibly the names of their chosen candidates for barangay chair and councilors since there will be manual voting in Oct. 28 elections.

Comelec spokesman James Jimenez also reminded voters to write the full name of their candidates, especially if some of them have the same surnames.

Unlike the automated elections, he said the votes for the barangay council seats would be read by the members of the Board of Election Tellers (BET) and not by the voting machines.

“If your writing is as ugly as mine, you should be more careful because it will be the BETs who will read your votes,” Jimenez said in a news briefing at Camp Crame.

“If they don’t understand what you’ve written, it’s likely that your votes will be wasted,” he said.

In areas where two or more candidates are vying for the same position, the ballots that contain only the surname of the candidate will be credited to the incumbent, he said.

“This is because of the principle of the equity of the incumbent,” Jimenez said. “It’s the most common reason why votes intended for one candidate are credited to another candidate.”

Although the Comelec is reverting to manual voting and counting for Monday’s polling, Jimenez said the elections would be faster since the balloting would only be at the precinct level.

He said that voting in some areas, particularly in villages with only one polling precinct, was expected to be concluded within a few hours.

Jimenez said confusion and other related problems might only occur outside the voting centers “because of impatient voters.”

He also urged the public to help guard against election law violations by taking photographs of the illegal acts being committed and reporting these immediately to the police and Comelec officials in the area.

“But they should do it in a way that their safety will not be compromised,” Jimenez said.

“If they can take pictures with their cell phones, that would be better. They can just relay the information to us and we will take care of it.”

“They should always remember that no report is worth their safety,” he said.

Jimenez said the Comelec and the Philippine National Police were also focusing on a reported rise in “industrialized vote-buying,” or the rampant and systematic buying of votes, in some areas.

Unscrupulous candidates usually distribute cash in exchange for votes a few days before the elections, he said.

“We will focus on industrialized vote-buying because this involves a lot of money and it’s more difficult to stop,” Jimenez said.

“We will leave it to the vigilant public to report these cases of direct distribution of money to the voters.”

In a previous incident in Norzagaray, Bulacan province, Jimenez said authorities seized boxes packed with money in bundles supposed to be used by supporters of a candidate.

In some areas in Mindanao, he said registered voters were selling their votes for as low as P10 and P20 each.