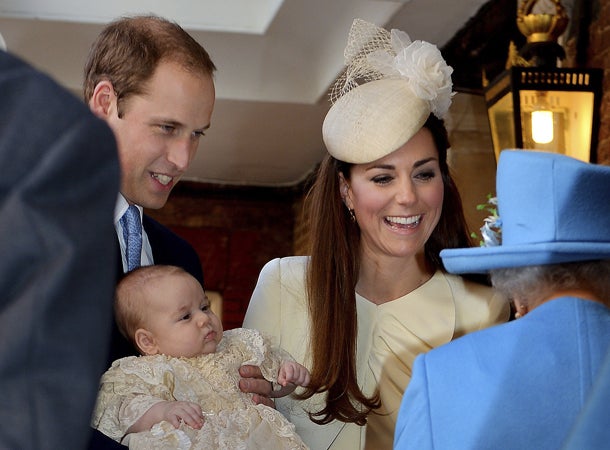 Britain’s Queen Elizabeth II, right, speaks with Prince William and Kate Duchess of Cambridge as they arrive with their son Prince George at the Chapel Royal in St James’s Palace, Wednesday Oct. 23, 2013. Britain’s 3-month-old future monarch, Prince George will be christened Wednesday with water from the River Jordan at a rare four-generation gathering of the royal family in London. AP

LONDON – Britain’s baby Prince George was christened in a private ceremony on Wednesday, with his proud parents Prince William and Catherine giving the world a rare glimpse of the chubby three-month-old boy.

Wearing a frilly cream lace gown, the third in line to the throne was carried into the Chapel Royal of St James’s palace by his father, his mother Kate close by, elegant in a cream Alexander McQueen outfit.

Queen Elizabeth II and the couple’s parents and siblings, including William’s younger brother Prince Harry, were among just 22 guests at the ceremony, including seven newly-named godparents.

Archbishop of Canterbury Justin Welby, the spiritual head of the world’s Anglicans, performed the baptism, which involves pouring holy water from the River Jordan on the baby’s head.

Television pictures showed the light-haired George Alexander Louis appearing wide awake and calm. He even gave the semblance of waving at the 87-year-old queen, his great-grandmother, when his father moved his arm up and down.

Photographs of the gurgling prince were splashed across Britain’s Thursday newspapers, which were charmed by his serene performance.

The Sun ran the headline “Georgeous – Prince is good as gold on big day”, while the Daily Telegraph carried a front-page photograph of him in his mother’s arms under the words “the perfect prince”.

Inside, the Telegraph said the baby showed “regal calm”, while the Daily Mail and Times both released souvenir editions celebrating “Gorgeous George”.

The low-key ceremony reflects the fact that the Duke and Duchess of Cambridge want their son to have a relatively normal upbringing and have closely guarded his privacy. He has only appeared in public once before, when they left hospital after his birth on July 22.

The couple broke with tradition by naming only one royal, William’s cousin and champion horse-rider Zara Philips, among the godparents, with the others being childhood, university and work friends.

The ceremony welcomes Prince George into the Church of England, which he is destined to lead as future king and “Defender of the Faith”.

During his address, Welby spelt out George’s responsibilities as a Christian, saying he “is to share the life of Christ”.

“That sharing may be in words, or generous actions – most likely both – but it will be both very costly and infinitely rewarding,” he added.

Harry and Kate’s sister Pippa Middleton both read passages from the Bible.

Each of the seven godparents was asked to commit to providing Prince George with guidance as he grew up.

Besides Zara Phillips, pregnant with her first child with rugby player husband Mike Tindall, they include William’s childhood friends William van Cutsem and Earl Hugh Grosvenor; Julia Samuel, who was close to William’s mother Diana; and Emilia Jardine-Paterson, who went to the private Marlborough College with Kate.

A handful of royal fans camped overnight outside the palace hoping for a glimpse of the queen and her three direct heirs – Prince Charles, his son Prince William and baby George.

“This is a very special moment. We will see three kings in the making,” said John Loughrey, a 58-year-old fan wearing a raincoat bearing the pattern of the Union Jack flag.

In the House of Commons, Prime Minister David Cameron urged lawmakers to “join me in celebrating” the event.

The christening was in sharp contrast to the Duke and Duchess of Cambridge’s lavish 2011 wedding, which was broadcast live on televisions across the world, and to the media frenzy surrounding the birth of their first child.

Just six members of the royal family attended, along with Kate’s parents Michael and Carole Middleton and her siblings James and Pippa.

The service was conducted behind closed doors although an official photograph by celebrity snapper Jason Bell will be released to the public on Thursday.

Afterwards the guests were invited for tea at Charles’s official London residence, Clarence House, where, following British tradition, a portion of William and Kate’s wedding cake was to be served.

The official photos are expected to gain iconic status, the first time four generations of monarchs have been pictured together since 1894, at the christening of the future king Edward VIII.

“It reinforces the public perception that the British royal family is going to be around for a long time to come,” he told AFP.