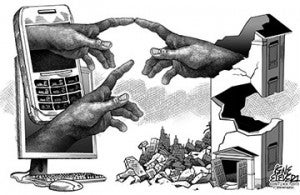 The power of social networking sites is once again being demonstrated in the aftermath of the Oct. 15 earthquake that hit the Visayas.

Individual netizens have also been posting and re-posting information to hasten the delivery of aid.

They are also circulating digital posters with messages like “Our churches may have have fallen but our faith is stronger.”

Positive statements like this lift people’s spirits even as the ground continues to reel with aftershocks.

Sharing advisories when the earth shakes and right after a tremor is also a laudable act, but so is shooting down false information.

Case in point: The rumor circulating by text and social networks warning of an impending magnitude 8.0 earthquake caused pockets of panic.

What made it scary was the misleading attribution that the report came from TV 5 and the Philippine Institute of Volcanology and Seismology. (Phivolcs).

Cebu Daily News was barraged Sunday evening with passed-on text messages, and a re-post on CDN’s Facebook page about it, along with the plea: Is this true?

As fast as we could, we posted and text blasted a denial, after calling up TV 5 peers in Manila to warn them that someone was fanning fear using their credentials.

The information was later discredited by Phivolcs Director Reynato Solidum, who said it was highly unlikely for a bigger temblor to originate from the fault where the quake of Tuesday last week emanated. Aftershocks are expected to weaken as time passes, he said.

Apparently, data from Phivolcs was taken out of context by an anonymous sender. A similar misinterpretation of an official Phivolcs “tsuanimi alert” was behind the mini-stampedes in Cebu last year when people expected tidal waves out of the Cebu harbor – even though the 6.9-magnitude earthquake originated from Negros island west of the province of Cebu.

Why did people believe these wild scenarios so easily? In the absence of programs of disaster preparedness and a well-informed citizenry, the public will always be vulnerable to hoax warnings like this.

Netizens who spread information at the speed of light must also learn the discipline of verification.