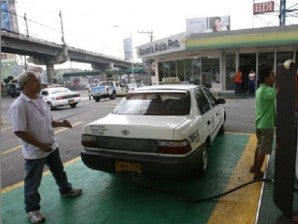 The Land Transportation Franchising and Regulatory Board (LTFRB) has been receiving complaints on taxi drivers using a special spray to immobilize female passengers.

LTFRB chairman Winston Ginez in an interview with Radyo Inquirer 990 AM disclosed the new modus operandi of some taxi drivers preying on unaccompanied female passengers.

Containing a still unknown chemical solution, the “special spray” is being used by taxi drivers to make their passengers feel numb and dizzy after applying the liquid into a towel and expose it to the cab’s airconditioner.

He said that in some instances, the drivers would lower their windows so they would not smell the substance.

In a viral Facebook post,  a netizen went into detail how a taxi driver drugged her last Sunday afternoon. The woman said the substance the driver sprayed smelled Vanilla-like.

The woman said she flagged down the taxi, bearing the name “Dad’z” and plate number UVW 243, along Tomas Morato avenue in Quezon City. She described the driver, who was in his 50s, as stout and fair-skinned.

The LTFRB chair said that since August this year, up to seven similar incidents have been reported to the transportation agency by victims. All happened in Metro Manila.

Ginez noted that most attacks happened when the taxi was carrying a single female passenger and in broad daylight.

But he said, the involved taxi units came from different operators.

“So far, we have verified the taxi units’ plate numbers. They were all registered in our databases. Right now, we’ve already summoned and sent show cause orders to the involved taxi operators and drivers,” Ginez said.

The National Capital Region Police Office has also worked with the LTFRB to track down the reported taxi units.

He reiterated that those drivers, if confirmed guilty of the scheme, would be blacklisted.

“We’re also requesting the victims to cooperate with us for profiling so we could warn ahead other female passengers,” he added, noting that those vitims who do not want to be identified would be given protection by the LTFRB.

Since negative reports on cab drivers were becoming frequent, he appealed to the taxi operators to not tolerate erring drivers.

“And to the taxi drivers, please report to us or to your operators your fellow cab drivers who are committing these modus so we can act on it immediately,” he said.

“There’s only a small percentage of bad taxi drivers,” he said.

Ginez said the modus operandi ruins the reputation of the industry.