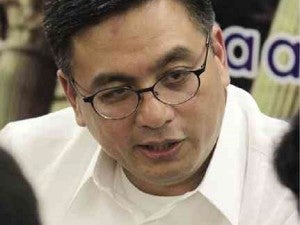 MANILA, Philippines—A Manila court dismissed Tuesday a petition by 13 port collectors seeking to block their transfer to another office as part of an ongoing revamp at the Bureau of Customs (BOC).

But it was only a partial victory for Customs Commissioner Ruffy Biazon. The Manila court also dismissed the bureau’s petition to junk the case because of the court’s lack of jurisdiction.

In a statement on Tuesday, Biazon directed the group of protesting port collectors to immediately report to the Customs Policy Research Office (CPRO), a newly created office under the Department of Finance (DOF).

At the same time, the BOC and DOF went ahead and asked the Supreme Court to reverse the Manila court’s decision regarding their own petition over jurisdiction, arguing that the proper venue for such complaints was the Civil Service Commission.

That same say, Judge Felicitas Laron-Cacanandin considered the collectors’ petition for a writ of preliminary injunction or an indefinite TRO and found it “not proper.”

In a four-page decision, dated Oct. 21, the judge said “the court cannot enjoin an agency from performing an act within its prerogative, except when in the exercise of its authority it gravely abused or exceeded its jurisdiction.”

However, she also denied the DOF and BOC’s motion to dismiss the case entirely for lack of juristiction.

In granting the TRO extension, the court had said it was “tentatively convinced that the right of the petitioners exists and the implementation of the assailed Customs Personnel Order (CPO) is violative of their rights.”

On Oct. 4, the Manila trial court extended the 72-hour TRO earlier sought by the collectors to 20 days, including the original respite.

The court had stressed that while it agreed with the administration’s policy to institute reforms in the BOC, “it lays clear that reforms should also be made under the purview of the dictates of the Constitution as the supreme law of the land and must necessarily satisfy all questions of legalities.”

Sought for comment, one of the leaders of the collectors’ group, told the Inquirer they “would definitely comply with the CPO.”

Meanwhile, in a 40-page petition for certiorari and prohibition, Biazon and Finance Secretary Cesar Purisima, through Solicitor General Francis Jardeleza, said the Manila judges’ intervention in the revamp issue “constitutes a harrowing judicial straitjacket that impedes the reform agenda of this administration.”

“Foremost, it sends a strong message that an act of patent nullity by the judiciary no less, could immediately paralyze and render inutile valid executive acts aimed at pioneering national reforms,” Jardeleza said.

Biazon and Purisima accused the Manila judges of acting beyond their jurisdiction, citing previous Supreme Court decisions that stated that the Civil Service Commission had primary and exclusive jurisdiction over the cases involving the transfer of government employees.

“The issue at hand is not about who, but what; it is not about individual loss, but about national gain. Whether from the birth pains of reform, this nation can gain a foothold, nay, a stride, into restoring this nation into its prideful place from the clutches of a ‘kleptocratic mafia’ that had gained a stranglehold into one of the nation’s primary sources of revenue,” the petitioners said.

On Sept. 17, Biazon transferred a total of 27 field collectors to the research office.

Talusan and Carreon later withdrew from the case.

Read Next
Bohol, Zamboanga City village polls set for Nov. 25
EDITORS' PICK
Ahead of ONE: Full Blast II, Mongkolpetch warns Elias Mahmoudi: ‘Watch out for my fists’
Synology NAS: A photo storage and multimedia server for your home
DILG takes over Cotabato town as all officials go on quarantine
Local gov’ts may start COVID-19 vaccination of poor residents using excess supply
Tighter curbs sought in provincial COVID-19 hot spots
Alex Eala wins Grand Slam on Independence Day: ‘I hope I made my contribution to the country’
MOST READ
‘Hindi pwedeng take 2,’ Sotto tells presidential, VP aspirants
Lacson: Kind-hearted Leni ‘in it to win’ presidency in 2022, but…
Calida’s ‘mental calisthenics’
NCR Plus remains under GCQ from June 16-30
Don't miss out on the latest news and information.