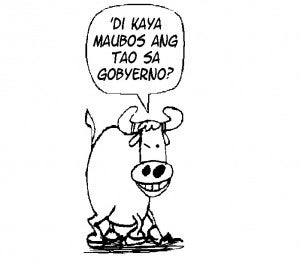 Want to save the country from corruption? Don’t just push for the removal of the pork barrel—go after the “pigs” as well.

Archbishop Emeritus Oscar Cruz gave that advice to Filipinos who have been outraged by the massive misuse of the pork barrel—officially called the Priority Development Assistance Fund (PDAF)—by some senators and members of the House of Representatives.

“So what if the pork is gone but the pigs remain?” Cruz, one of the vocal critics of the Aquino administration in the Church, wrote in his blog entry titled “On Pork and Pigs.”

Cruz noted that rallies had been held in Metro Manila and elsewhere, church bells had been tolled and “cryptic expressions” had been voiced against the PDAF and its variant, the Disbursement Acceleration Program (DAP).

But all these actions would be futile, even if the Supreme Court ruled on the constitutionality or unconstitutionality of the pork barrel or a people’s initiative would lead to a law scrapping it, if those who had dipped their hands in the national coffers would remain in power, Cruz lamented.

‘Get rid of thieves’

Cruz was among the bishops who have participated in protests calling for the abolition of the pork barrel, including the citizen-led Million People March in Luneta in August and in Ayala early this month.

“The question is neither intended as a mere joke or simply meant to have fun,” Cruz said. “It is, in fact, equivalent to a statement that more than only doing away with the object of thievery, what is really needed is to get rid of the thieves.”

The senior prelate said that for Filipinos to be able to save the country from corrupt practices committed by those in power, they must not only fight the cause of corruption but the crooked politicians, as well.

“To say it another way, it is not enough merely to do away with the pork. It is necessary to get rid of the pigs and this means all the pigs from the top to the bottom of the government,” Cruz said.

Asked about Cruz’s statement that Filipinos must push for the removal of pigs in government, Speaker Feliciano Belmonte said: “That’s a bit much (Masyado naman ’yan). But we won’t resort to name-calling.”