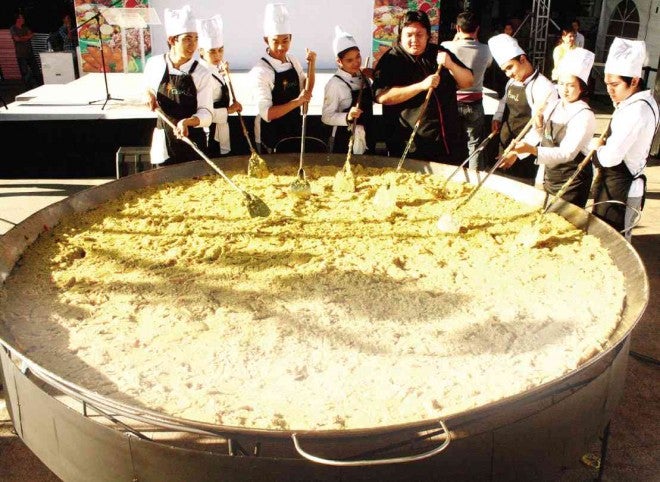 THE “BIRINGHE” (Kapampangan version of paella), cooked for two hours by local chefs and students in an 11-foot diameter “paellera,” is a symbol of Pampanga’s culinary tradition showcased during the Big Bite! The Northern Food Festival.

A young man savoring his “empanada” (fried, meat-stuffed pastry) remarked aloud: “Punta tayo sa Ilocos (Let’s go to Ilocos)!” Then and there, he and his friends sealed a plan to go there before Christmas.

In eliciting such action, Big Bite! The Northern Food Festival proved to be more than an extraordinary food market organized by Ayala Land Inc. (ALI) at its Marquee Mall in Angeles City from Oct. 18 to 20.

In featuring cuisines, delicacies, beverages, wines, flavorings and other food products from the plains of Bulacan to the highlands of Benguet in 100 stalls, ALI helped promote tourism in the regions of Central Luzon, Cagayan Valley, the Ilocos and the Cordillera.

As it turned out, the extraordinariness is in the variety and availability, prompting buying binges because, as one mother put it, one need not travel too long or comb groceries to stock on favorites. 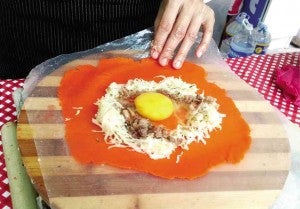 Gladys Pablito, from Benguet, was a league of her own as she was the only vendor who sold fresh vegetables, native oranges, broom and curtain made out of a sturdy kind of “talahib” (weed).

Pablito said Marquee gave her two stalls—at no cost. “It’s a big help to me,” she said.

A mall guard said more families filled the picnic area; some were seen eating together meals usually reserved for fiestas, such as goat stew. 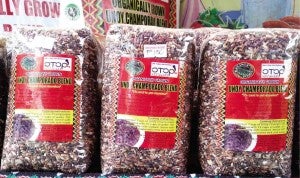 But perhaps Big Bite’s best symbol was the “biringhe,” a Kapampangan version of the Spanish paella.

“Kapampangan people are known all over the Philippines for how they prepare food, which cannot be matched by people in other provinces. Their ingredients are different,” said Pampanga Gov. Lilia Pineda.

Big Bite is the latest food event that Pampanga had been hosting since June.

From July to September, the traveling fair, called the Central Luzon Organic Market (CLOM), visited malls in Pampanga to showcase diverse products from a group of 20 to 30 sellers. 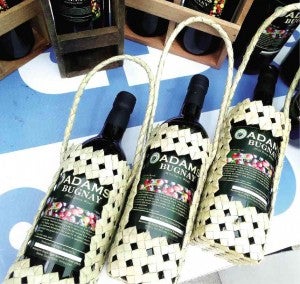 While fairs are usually organized by government agencies, the CLOM is unique because the moving force behind it is from the private sector, Edna Eufemio.

Eufemio, a college teacher-turned-businesswoman, decided to help farmers and entrepreneurs because “their challenge is marketing.”

She said she experienced this reality when she and her business partner organized the Green Weekend Market in December last year in Angeles City.

“Farmers told me that although they were ready to harvest, they still don’t have buyers for their produce,” said Eufemio, 49, owner of Ad Central Media Productions based in Angeles.

“There’s a growing market for organic food and products,” she said to explain why she pressed on with the idea of organizing the CLOM. “People have been shifting to a healthy lifestyle.”

Andrew Villacorta, agriculture regional director, said fairs such as those done by CLOM had benefited farmers and boosted the Organic Agriculture Act of 2010 (Republic Act No. 10068).

Rogelio Sotero called CLOM a “big help” because through it, he was able to sell herbal plants and condiments made by his Good Earth Farms and Food in Tarlac City. He and his wife Rowena began with a capital of P10,000 in 2006, branching out lately in a restaurant that sells healthy food.

Emma Taruc of Pampanga sells her San Siera Herbal Oil to encourage natural medicine. From producing a monthly average of 100 60-ml bottles of virgin coconut oil mixed with mint and other herbs starting 2008, she has been making 1,000 bottles every month in the last two years.

Jomar David said he made quick sales from the natural and nutritious delicacies produced by his company, Nutri Delight.

“We decided to do it in Pampanga because our consultants told us this is the place to go and it has a great tradition of cooking,” Ledesma said. With a report from Jun Malig