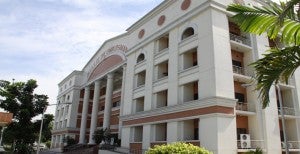 Office of the Ombudsman PHOTO FROM http://www.ombudsman.gov.ph/

MANILA, Philippines—The new “Number Two” man in the Office of the Ombudsman is Melchor Arthur Carandang.

Appointed by the President Benigno Aquino III, Carandang has been officially named as the Overall Deputy Ombudsman, the Palace said Tuesday in a statement.

According to the state-run Philippine News Agency (PNA) release, he will replace the retired Overall Deputy Ombudsman Orlando Casimiro, who left the office last August 23 after seven years of service.

Carandang formerly held the Assistant Ombudsman post prior to his Deputy Ombudsman nomination, wherein he got the highest number of shortlist votes from the Judicial and Bar Council (JBC).