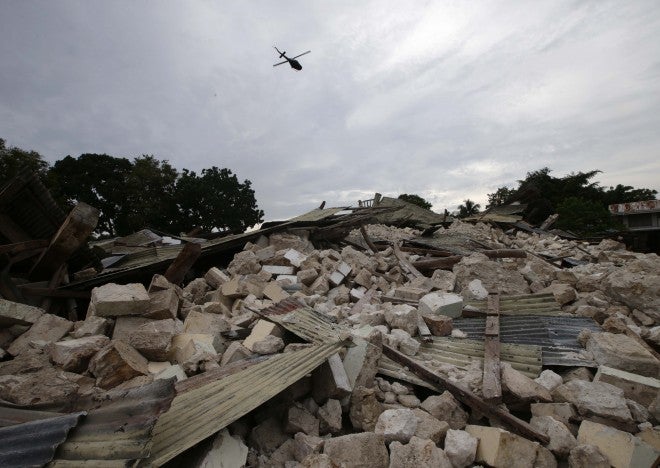 A Philippine Air Force helicopter hovers above the totally collapsed Our Lady of Light church at Loon, Bohol, Thursday Oct.17, 2013. The damage caused by the 7.2-magnitude earthquake in Bohol province on Oct. 15 has been estimated to reach P2.5 billion, including the damage to heritage churches, which is estimated at P1.1 billion, Bohol Gov. Edgar Chatto said on Monday, Oct. 21. AP PHOTO/BULLIT MARQUEZ

The damage to heritage churches is estimated at P1.1 billion, although the amount is based on the cost of restoring the centuries-old structures, Chatto said.

He said the damage to infrastructure reached P830 million; to the municipal hall, P106 million; to hospitals, P92 million; and to the province’s economy, P52 million.

The first district of Bohol sustained the biggest damage, he added.

Roads have been opened to traffic, including the shorter routes going to the eastern part of Bohol, the governor told a briefing.

He said provincial officials were looking for alternate routes to cross the isolated towns of Maribojoc and Loon from Cortes town.

Big rocks that block the road from San Isidro to Antequera will be blasted, Chatto said.

Despite the national government’s promise to restore electricity in the province within three days, 18,308 homes remained without power a week after the quake.

Chatto said the Bohol Electric Cooperative still had to inspect the homes before reinstalling power.

Relief has reached 29 municipalities in the province, with 15 still to get help.

With the reopening of more roads, however, the movement of relief goods is expected to pick up speed.

Chatto said municipal disaster councils were running the relief operations to ensure that there would be no gaps in distribution.

Archbishop John Du of Palo in Leyte province has urged people to help victims of the earthquake.

Fr. Amadeo Alvero, a spokesman for the archdiocese, said Du launched a fund drive for the earthquake victims on Sunday.

While Eastern Visayas felt the earthquake, it did not cause damage to any part of the region.

The Archdiocese of Palo covers the provinces of Leyte, Biliran and the three Samar provinces (Samar, Eastern Samar and Northern Samar).

Southern Leyte is part of the Cebu archdiocese.

Leyte Vice Gov. Carlo Loreto said he and other officials of the province would travel to Bohol to turn over the financial aid as well as relief goods.—With a report from Joey Gabieta, Inquirer Visayas