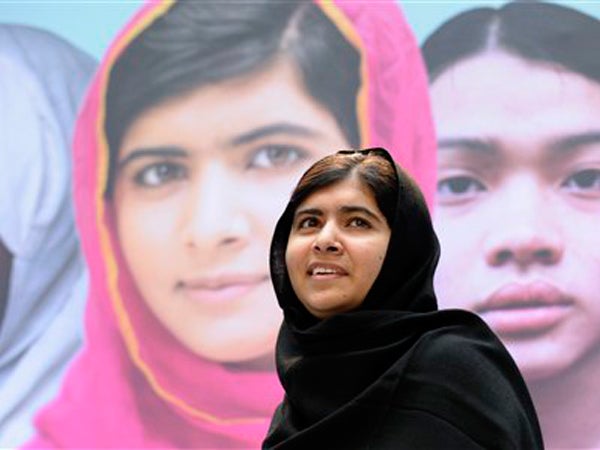 In this Oct. 11, 2013, file photo Malala Yousafzai, the 16-year-old girl from Pakistan, who was shot in the head by the Taliban last October for advocating education for girls, speaks on occasion of the International Day of the Girl at the World Bank in Washington. Malala has inspired the development of school curriculum encouraging advocacy. George Washington University announced Monday, Oct. 14, that faculty members are creating curriculum tools to accompany her book, “I Am Malala.” Several faculty members will pilot the curriculum early next year for both college and high school instruction. AP

WASHINGTON – The 16-year-old Pakistani teen targeted for a Taliban assassination because she championed education for girls has inspired the development of a school curriculum encouraging advocacy.

George Washington University announced Monday that faculty members are creating multimedia curriculum tools to accompany a book recently released by the teen, Malala Yousafzai. Several faculty members will pilot the curriculum early next year for both college and high school instruction. Free of charge, it will focus on themes such as the importance of a woman’s voice and political extremism, the university said.

The tools won’t just look at the teen’s story, but also how the same issues get reflected elsewhere, such as when girls face child marriage and pressures to leave school, said Mary Ellsberg, the director of the university’s Global Women’s Institute.

“It’s going to be really interactive and really encourage students to do … activities outside of school, it will encourage them to get engaged in the communities and as well to help the Malala Fund directly,” Ellsberg said.

The university’s Global Women’s Institute is partnered with the Malala Fund, a nonprofit that seeks to ensure girls around the world have access to education.

In 2012, a Taliban gunman walked up to a bus taking Malala and other children home from school in Pakistan’s volatile northern Swat Valley and shot Malala in the head and neck. Another girl on the bus was also wounded. Malala now resides in Britain, where she was flown for medical care. Her memoir is “I am Malala.”