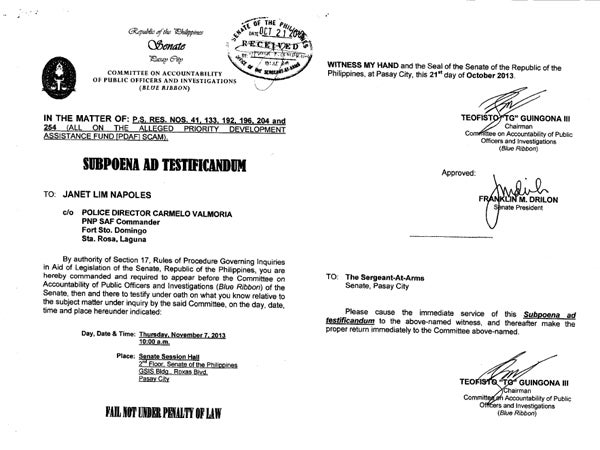 Copies of the subpoena for  Janet Lim-Napoles were  released to the media by the office of Senator Teofisto Guingona III.

Drilon approved the subpoena issued by Sen. Teofisto Guingona III, chair of the Blue Ribbon Committee in connection with the Senate inquiry on the pork barrel scam.

Guingona said it would be “convenient” to have Napoles and the whistleblowers in one hearing.

“I think it’s very convenient so we can have a system of cross checks and balances…Whatever is or are stated can be validated or repudiated,” he said.

In the subpoena ad testificandum, Guingona set Napoles’ and the whistleblowers’ appearance at the committee hearing on Nov. 7.

Asked why it would take that long for Napoles to appear, Guingona said the focus right now is on rehabilitation work for the earthquake victims in Bohol and Cebu, the barangay elections on Oc. 28, and the observance of All Saints’ Day on Nov. 1.

Napoles is detained at the police camp while undergoing trial for the alleged abduction and detention of her cousin-turned-whistleblower Benhur Luy.

The subpoena, addressed to the Philippine National Police (PNP) in Fort Sto. Domingo where Napoles is detained, would still go through the courts for permission, said Guingona.

“If the court disallows, it should have a very good reason to do so.  Because right now I cannot think of any other reason why the court will not allow Janet Lim-Napoles to come to the Senate,” he said.

Asked if it was possible that the court would cite security reasons, Guingona said Napoles’ security would be an issue of the PNP and not the courts.

“I can’t understand why the PNP cannot make the necessary security arrangements so we can have hearings here in the Senate,” he said.

Guingona also said he did not want to speculate if Napoles will cooperate with the Senate or will invoke her right against self-incrimination.

Guingona has requested a subpoena for Napoles in late September. Instead of signing it, Drilon deferred to Ombudsman Conchita Carpio-Morales, who advised against her appearance in the inquiry ahead of a hearing of a plunder complaint against her.

Guingona said Drilon was wrong to seek the Ombudsman’s comment on the matter, insisting that the independence of the Senate as part of the legislative department, a co-equal branch of government, must be respected at all times. Guingona later wrote Drilon appealing for reconsideration of his earlier move. Drilon referred the matter anew to Morales.

Morales later said she was submitting to the collective wisdom of senators to decide on the matter, but was standing by her original opinion. At this point, Drilon called a caucus to decide the matter. Before the caucus last Wednesday, he announced at the floor that he had decided to sign the subpoena.

“By authority of Section 17, Rules of Procedure Governing Inquiries in Aid of Legislation of the Senate… you are hereby commanded and required to appear before the Committee on Accountability of Public Officers and Investigations of the Senate, then and there to testify under oath on what you know relative to the subject matter under inquiry by the said committee, on the day, date, time and place,’’ Guingona said in the subpoena.