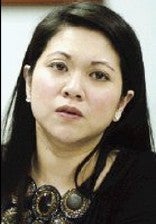 MANILA, Philippines—Malacañang on Sunday said it was unfazed by the so-called “people power” against the pork barrel being organized by former Chief Justice Reynato Puno among the ranks of business, Church and civil society groups.

Deputy presidential spokesperson Abigail Valte noted that the people’s initiative being pushed by Puno and his group was “within the bounds of law and they are free to pursue that as they wish.”

“We have no worries,” she said on her weekly radio forum aired over the government-run Radyo ng Bayan. “In any democracy, that is part of our Constitution. They are perfectly free to pursue any means or measure that they feel will push their advocacies forward.”

Puno is campaigning for a people’s initiative to enact a new law that would ensure that the pork barrel would indeed be scrapped and that public funds would not go into the pockets of politicians.

He said Congress “cannot legislate against its own selfish interest,” insisting that “legislators have lost the moral authority to be the guardians of the people’s money.”

His proposed law partly aims to provide more teeth to the Commission on Audit to go after officials misusing taxpayer money.

Asked if the Palace was amenable to Puno’s proposal, Valte told the Inquirer: “In principle, the administration supports proposed legislation that aims to strengthen institutions mandated to safeguard public funds.”