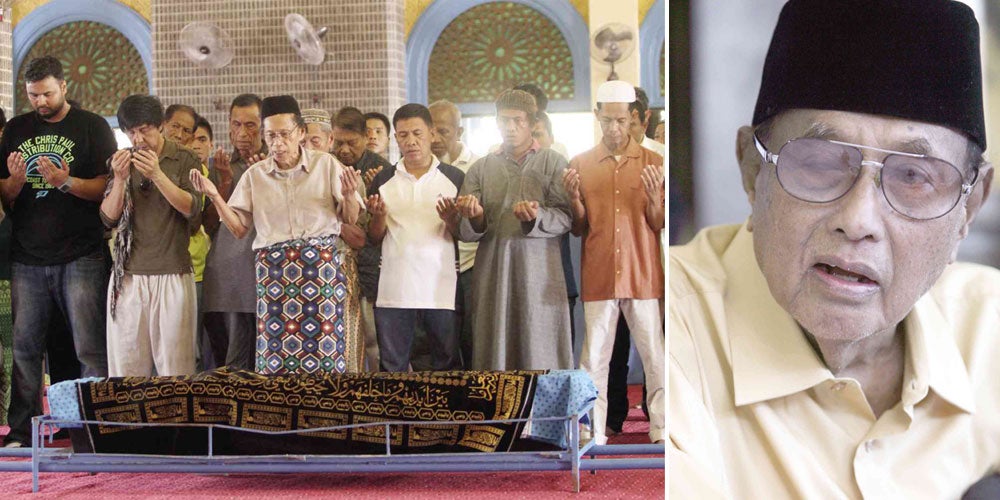 SULU SULTAN DEAD BUT NOT SABAH CLAIM. Relatives and supporters pray before the remains of Sulu Sultan Jamalul Kiram III (right) at the Blue Mosque in Maharlika Village, Taguig City. Kiram died Sunday at the age of 75. NIÑO JESUS ORBETA

The ownership claim of the sultanate of Sulu and North Borneo to Sabah will not be buried with Sultan Jamalul Kiram III.

Kiram made this clear to his family before he died at the Philippine Heart Center in Quezon City early Sunday, according to Abraham Idjirani, the sultanate’s secretary general and spokesman.

The 75-year-old sultan, the 33rd crowned ruler of one of the oldest sultanates in Southeast Asia, died from multiple organ failure due to complications of diabetes at 4:42 a.m.

Malacañang offered its condolences to the family of Kiram, who tried to force the government to press his clan’s claim to Sabah through an armed intrusion into the oil-rich territory in North Borneo in February, an adventure that left dozens of Filipinos and Malaysians dead.

But the death of Kiram does not mean the end of the Philippine government’s claim to Sabah, deputy presidential spokesperson Abigail Valte said.

She said the government’s study of the claim that President Aquino ordered in March was still going on.

Kiram’s wife, Fatima Celia, said her husband died in her arms at the hospital. She said that before he died, he ordered his family and followers to keep alive the historic territorial claim to Sabah.

Although largely forgotten and dismissed as a vestige from a bygone era, Kiram’s sultanate, based in Sulu in southern Philippines, stirred up a security crisis in Malaysia when Kiram’s younger brother, Agbimuddin Kiram, and about 200 followers, dozens of them armed, barged into Sabah’s coastal village of Lahad Datu.

Stunned, Malaysia responded by laying siege on Lahad Datu and trying to convince Agbimuddin to leave and take up his family’s claim to Sabah with the government in Kuala Lumpur.

In late February, the negotiations erupted into violence. Malaysia responded to the death of two policemen by sending in ground troops and launching air strikes on Agbimuddin’s position.

Agbimuddin lost more than 60 followers in weeks of sporadic fighting with Malaysian security forces, who lost 10 of their own.

The fighting eased off in late April with Agbimuddin disappearing and his followers being intercepted by Philippine authorities in the Sulu Sea as they tried to reenter.

The Department of Justice has brought charges against the arrested followers of Agbimuddin in a court in Sulu.

Agbimuddin has not been seen since. He is believed to be moving from island to island in Sulu to avoid capture.

Malaysia has governed resource-rich Sabah as its second-largest federal state since the 1960s.

The Sulu sultanate, which emerged in the 1400s, built a legend for its wide influence at the time and its feared Tausug warriors. Chinese and European leaders once sent vassals to pay homage to their powerful forebears, Idjirani said.

The Sulu sultanate preceded both the Philippine Republic and Malaysia by centuries.

But overrun by history, the Kirams now carry royal titles and nothing much else.

“I’m the poorest sultan in the world,” an ailing Kiram said in an interview in March at his rundown residence in Manila.

The Kirams claim Sabah has belonged to their sultanate for centuries and is only leased by Malaysia, which they say pays them a paltry annual rent.

Malaysian officials contend the payments are part of an arrangement under which the sultanate has ceded the 74,000-square-kilometer territory to their country.

Philippine leaders have relegated the volatile feud to the back burner despite efforts by the Kirams to put it on the national agenda.

President Aquino did not order a review of the claim until Agbimuddin and his small band of followers were already fighting a running gun battle with Malaysian forces in Sabah in March.

Idjirani said Kiram had told his family that he wanted to be buried in Maimbung town, Sulu province, regarded as the original capital of the Sulu sultanate.

“The family has submitted themselves to the will of Allah. We know that we cannot do anything if Allah decides to take us,” Idjirani said in a mobile phone interview.

Before his death, Kiram issued three decrees to his family and the members of the sultanate, Idjirani said.

First, Kiram ordered his brothers “to love one another and all the members of the Kiram clan.”

Second, he wanted his family “to be always united.”

“Lastly, Sultan Kiram said the fight to repossess Sabah from Malaysia must continue for the entire Filipino people,” Idjirani said.

As of Sunday afternoon, Kiram’s body was in the Blue Mosque, located just across the sultan’s modest home in Maharlika Village, Taguig City.

Idjirani said the family was arranging a flight to take Kiram’s body to Jolo, Sulu, so they could bury him within 24 hours after his death in accordance with Muslim tradition.

From Jolo, he said the body would be immediately transported and buried in a cemetery in Maimbung, 6 kilometers from Sulu’s capital town.

Idjirani said Esmail Kiram II, being Kiram’s oldest surviving brother, will be crowned next leader of the sultanate, which does not enjoy any political power over its “territory” in Sulu and Tawi-Tawi, unlike existing sultanates in Brunei and Malaysia.

Idjirani said Kiram talked to Agbimuddin on Saturday. He did not say how or where Agbimuddin was.

But he made it understood that Agbimuddin was in Sabah by saying that Agbimuddin decided not to return to Sulu for Kiram’s burial to secure the areas controlled by the sultanate’s forces.

“[Agbimuddin] knows he cannot do anything to undo what has happened. He was happy that they were able to talk,” Idjirani said.

Gov. Mujiv Hataman of the Autonomous Region in Muslim Mindanao offered his condolences to Kiram’s family.

“We pray that Allah’s mercy be upon him,” Hataman said.

Sulu Vice Gov. Abdusakur Tan said he went to Kiram’s house on Sunday to pay his last respects to the sultan “as a Tausug leader and a relative.”—With reports from Christian V. Esguerra; Julie S. Alipala, Inquirer Mindanao; and AP