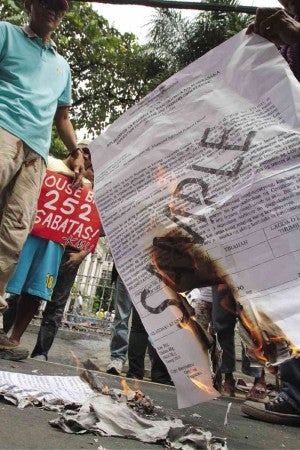 LUISITA farmworkers burn a replica of the Department of Agrarian Reform’s (DAR) application to purchase and farm undertaking certificate to symbolize their defiance against the DAR’s questionable process. The protest was held in front of the Supreme Court in Manila last August. NIÑO JESUS ORBETA

CITY OF SAN FERNANDO—The Department of Agrarian Reform (DAR) finished distributing copies of the certificates of land ownership award (CLOA) to more than 6,000 farmworkers in Hacienda Luisita on Friday despite questions and protests raised by some beneficiaries.

“The land in Luisita is now theirs,” Agrarian Reform Secretary Virgilio de los Reyes said in a statement, referring to the holders of 5,718 CLOAs. The certificates were given out in the 10 villages within Luisita from Sept. 30 to Oct. 18.

The release of the CLOAs took place 56 years after Don Jose Cojuangco Sr., President Aquino’s maternal grandfather, bought the estate using government loans. His grandson enforced the decision imposed by the Presidential Agrarian Reform Council passed down in 2006, which the Supreme Court upheld in 2012.

The DAR data showed that 6,189 CLOAs were generated, or 92.39 percent of the CLOAs registered with the Registry of Deeds in Tarlac.

The titles cover 4,099 hectares while the total beneficiaries counted 6,212.

Those who did not sign the documents to enable them to get the CLOAs have lived elsewhere, have left for abroad or are protesting DAR’s land distribution processes, Inquirer sources said.

Ambala, which filed the original case to cancel the stocks distribution program— the first form of agrarian reform in the estate—and give the land free to farmworkers, continues to assert nonpayment since, it said, they had already given out their labor.

Parungao insisted that the execution of the application to purchase and farmers’ undertaking (APFU) is a “mandatory legal requirement, which must be complied with to pave the way for the generation and registration of a beneficiary’s CLOA.”

“It contains, in plain and understandable language, the beneficiary’s obligations as such under the law,” he said.

Ambala has questioned the processes the DAR has undertaken in the distribution of lands in Luisita but Parungao said the agency “implemented the Supreme Court decision.”

The high court upheld the 2006 decision of the Presidential Agrarian Reform Council to give the land to farmworkers. Before this, farmworkers and mill workers mounted a joint strike, where seven workers died when strikers fought off government troops from regaining entry to the mill in November 2004.

Still unresolved is the special audit of the books of Hacienda Luisita to facilitate the payment of P1.3 billion from the proceeds of the sale of 500 ha to Rizal Commercial Banking Corp. and 80.51 ha for portions of the Subic-Clark-Tarlac Expressway. The audit firm chosen by the DAR and Luisita was not acceptable to Ambala.

Only 339 APFU, or 5.45 percent of the total, remained unsigned, according to Parungao.

“This means that the overwhelming majority of beneficiaries (94.5 percent) do not find the APFU objectionable, especially as they only get to pay a maximum of around P61 a month for the first three years for their farm lot,” he said.

De los Reyes said the DAR would next install the beneficiaries on their farm lots when sugar cane harvesting ends next month. Land boundaries would be placed when the areas are cleared, he said.

He said the DAR would also test soil samples to determine the support services the agency would offer to the beneficiaries in terms of their preferred crops.