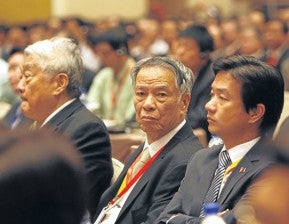 hat their businesses are given a level playing field.

ange in mindset,” Mr. Aquino said in his speech before the Philippines-China Economic and Trade Forum.

“We will not take short-cuts in order to close deals; we will follow the correct procedures,” he added.

It was a dig at the Arroyo administration, which figured in controversial deals with Chinese firms. These included the $330-million contract with China’s ZTE Corp. to set up a nationwide broadband network and the Chinese-sponsored Northrail project.

Arroyo canceled the deal in 2007 amid allegations of overpricing and payoffs to her husband. The Northrail project, whose cost rose from an initial $503 million to about $2 billion, is under review by the Aquino administration.

The President said the most important effort the Philippines was taking was instilling a culture of transparency and integrity in government.

“What this simply means is that investors will not anymore have to rely on connections in order to set up shop; the rules will not be circumvented and the law will be followed, creating an environment that is stable and predictable—and therefore, one that is conducive to profit,” Mr. Aquino said on the first leg of his four-day visit.

The President encouraged Chinese business to invest in the tourism, agriculture and infrastructure sectors.

“Also, consider the opportunities in the country’s significant competitive advantages: a highly skillful and well-educated workforce, a youthful and large domestic market,” he said.

The Philippine government expects $2 billion to $7 billion in Chinese investments from his visit.

“Let me declare once again: the Philippines is indeed open for business,” he said.

Mr. Aquino assured his audience of Filipino and Chinese business leaders that the country was taking steps to make its business climate desirable in the long term. 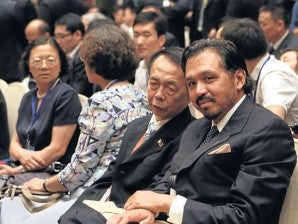 “The Chinese, perhaps among all the peoples of the world, know the value of taking the long view. You appreciate the point of thinking not only about the next step, the next day, or the next deal; you think years, even decades and generations into the future, strategizing your moves,” he said.

“To this end, my country is taking a clear direction: we know that transparent and fair processes build investor confidence. More businesses mean more jobs, giving our people more chances to rise in society,” he added.

The policy of providing a level playing for all investors has resulted in four credit upgrades for the Philippines during his administration of a little more than a year, the President noted.

He said gains in the Philippine economy were being channeled into developing infrastructure and investments in people in the form of social welfare programs, such as education and health.

“At the bottom line: equitable and inclusive growth for my people, which will empower them as consumers, who will further spur the growth of businesses,” he said.

He expressed the hope that the ties between the Philippines and China, which he said “go back centuries,” would become stronger than ever.

“In the past our commercial relations have been more beneficial to you, than to us,” he said. “Now, we have come here to balance the equation,” he added.

President Aquino first met with Chinese Vice Premier Wang Qishan before both leaders went to the hall of the China World Hotel. Both addressed the forum of business leaders.

He later met with Chinese President Hu Jintao. On Thursday, he is scheduled to meet with Premier Wen Jiabao.

During his trip, Aquino will visit the commercial city of Shanghai and Xiamen in southeastern Fujian province, where the family of his mother, former President Corazon Aquino, traces its roots. With a report from Reuters