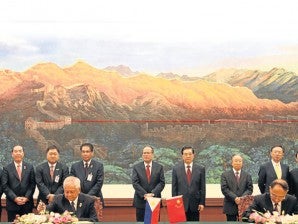 ‘OPEN FOR BUSINESS’. President Aquino and President Hu Jintao witness the signing of an economic agreement between the Philippines and China at the Great Hall of the People in Beijing on Wednesday. Earlier, Mr. Aquino said the Philippines is “open for business.” EDWIN BACASMAS

Beijing—President Benigno Aquino III on Wednesday told Chinese President Hu Jintao of his wish that the territorial dispute in the West Philippine Sea be settled with a “regional” solution, presidential spokesperson Edwin Lacierda said after the bilateral meeting between the two leaders.

In response, Hu reiterated the Chinese position that the dispute be resolved peacefully, Lacierda told reporters at a quick briefing outside the Great Hall of the People where the two leaders met.

The presidential spokesperson said Hu also encouraged the development of the strategic waterway into “a sea of friendship, peace and cooperation.”

“So both sides were very positive in addressing the issue in the South China Sea,” Lacierda said, referring to what China calls the body of water.

Spratlys, a group of islands in the West Philippine Sea that is believed to contain oil and gas deposits, is claimed in whole or in part by the Philippines, China and four other countries.

The Philippines has started oil and gas explorations in what Beijing considers its territory. Early this year, Manila accused Beijing of harassing its oil survey ship.

Beijing said recent construction work on an island by Philippine troops violated the spirit of a preliminary agreement with other Southeast Asian nations.

Lacierda said it was Mr. Aquino who initiated the discussion on the West Philippine Sea.

“He mentioned that we have differences but these differences should not deter us from moving forward,” Lacierda said.

The spokesperson said Mr. Aquino also mentioned the position of the Philippine government because the dispute over the Spratlys was a regional problem that required a regional solution.

Asked what Mr. Aquino meant by a regional solution, Lacierda said: “Because (of) the various claimants in the disputes.”

Before the two leaders met, the national anthems of the two countries were played and both Mr. Aquino and Hu trooped the line of Chinese soldiers and Navy and Air Force personnel.

The two leaders then went into a bilateral meeting after the formal ceremonies.

Hu told Mr. Aquino that his state visit would enhance the relationship between the Philippines and China.

“I believe your visit to China will further deepen our friendship, promote our practical cooperation and elevate the strategic and cooperative relationship between our two countries to a new high,” Hu said.

Mr. Aquino apologized for taking too long on acting on the invitation of the Chinese leader who was the first to invite him when the former assumed the Philippine presidency.

“But it is a truly worthwhile trip so far and… we will spend this opportunity to broaden and deepen the ties that have been existing between our peoples centuries upon centuries,” Mr. Aquino said.

Lacierda said that the issue of the NorthRail project was also discussed and that Chinese officials agreed with the proposition that it be “reconfigured.”

“The President mentioned that there were certain issues and in the NorthRail project that needed to be reconfigured. And the Chinese agreed and so in their own words, they attach a high importance to the project. Both sides directed their officials concerned with the project to resolve the NorthRail issue,” Lacierda said.

The NorthRail project, started during the Arroyo administration, is considered overpriced. The Chinese-sponsored project was initially worth $503 million but its cost reportedly ballooned to $2 billion.

Lacierda said the discussions between the two leaders delved mainly on trade and cooperation.

“What dominated the discussions primarily promotion of trade and investments and cultural, and the ties that bind the two countries,” he said.

“Generally the discussion was an expression of warmth on both sides. They welcomed each other. President Hu Jintao welcomed the Philippine President and President Aquino thanked the Chinese for their hospitality and grace in welcoming them,” he added.

Hu and Mr. Aquino were expected to witness the signing of several agreements before a state banquet was held for the state visitor.