More bodies being dug up in previously unreached places in Bohol 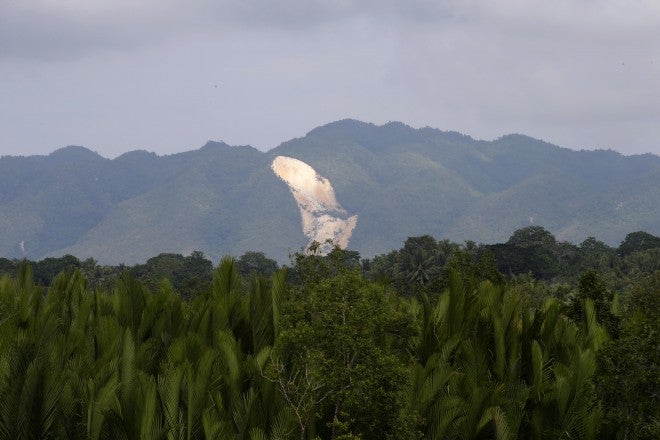 A landslide which was caused by Tuesday’s 7.2-magnitude earthquake is seen from Cortes township, Bohol province in central Philippines Wednesday Oct. 16, 2013. AP

CLARIN, Bohol—Apolinario Polinar had his eyes glued to the policemen and soldiers who were digging in the rubble that blocked the Kawasan River in Barangay Villaflor in Clarin.

He realized their chances of survival were nil but he still hoped his daughter Mary Grace, 21, son Joseph, 24,  and nephew Roger Tagsip would be found alive.

Apolinario, 79, burst into tears when the men from 911 Rescue Philippines and 6th Special Forces Company pulled out the bodies of the three at 4:40 p.m. on Friday.

“I didn’t expect this would happen to them. They had just gone to fetch some water,” he said in Cebuano.

Then the earthquake struck.

When his children and nephew failed to return home, he began to worry and ran to the river and was shocked to see a portion of the mountain had collapsed into the river. He was scared.

Apolinario sought help but rescuers could not get into Clarin because the roads were blocked by landslides.

Rescuers finally arrived shortly before noon on Friday when the roads were cleared. They consisted  of 10 policemen from 911 Rescue Philippines headed Supt. Orlando Yebra of Camp Crame and 12 from 6th Special Forces Company headed by Capt. Lolito Destajo.

The municipal government of Clarin lent the backhoe.

Digging started at 1 p.m. but it took the group more than thre hours to find the bodies and pull them out from 30 feet of mud boulders and trees.

Another body was found but they could not pull it because darkness was falling. The would wait till morning.

Destajo said they would also go to Barangay Katipunan,  in Sagbayan, to look for five persons who were believed to have been buried.

In the meantime, residents in Clarin complained that that they had yet to receive help from the government.

“What will we eat tomorrow and the coming days,” asked Francisca Fernando, 54, of Barangay Cabuy, Clarin.

She said her family had not received any food packs from the government since the earthquake on Tuesday. Fernando said they had been eating vegetables salvaged from their ruined backyard.

But help started to filter into Loon town, another devastated town.

A water purifying machine was brought to Loon to supply potable water to residents since their water system had yet to be restored.

Cmdr. Antonio Manuel of the Philipppine Navy Civil Military Office said the water purifying machine could filter and produce potable water at a rate of 22,000 liters a day. A generator set was set up  to run the purifier.

Roxas instructed that all means of transport be utilized to carry relief goods to the towns of Loon and Maribojoc, which had been isolated after the Abatan Bridge that linked them to the capital city of Tagbilaran collapsed.

In Tagbilaran, residents started picking up the pieces of their lioves, five days after the  earthquake.

Ice cream vendor JR Abellanosa started selling on the city streets on Friday when his supplier reopened his store. He said he was able to sell six tubs at P100 each.

Rey Paler, a tricycle driver also resumed plying his route on Wednesday when he noticed that only a number of his colleagues decided to stay off the streets after the earthquake.

“This is better so we can earn even just a little,” he said.

Some business establishments in the city have opened up.

Marcela, a mall in Tagbilaran, reopened although the management limited the number of customers coming in.

At the mall entrance, security guards would count the numbers of persons leaving and would let the same number in.

Most buyers purchased rice and canned goods and instant noodles.