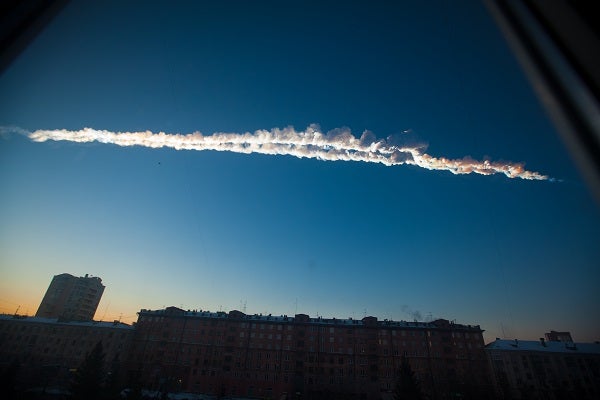 A meteorite contrail is seen over the Ural Mountains’ city of Chelyabinsk, about 1500 kilometers (930 miles) east of Moscow, Russia. If the skies clear before midnight on Thursday, Oct. 17, 2013, sky watchers would be treated to an impressive meteor shower, known as the Orionids. AP PHOTO/CHELYABINSK.RU, YEKATERINA PUSTYNNIKOVA

MANILA, Philippines-If the skies clear before midnight, sky watchers would be treated to an impressive meteor shower, known as the Orionids.

Although the Philippine Atmospheric, Geophysical and Astronomical Services Administration (Pagasa) can vouch that one of the year’s most beautiful meteor showers may be seen until Friday next week, it cannot guarantee cloudless skies.

Pagasa forecasts light to moderate rainshowers and thunderstorms on Thursday in Metro Manila, Southern Luzon, the Visayas and Mindanao.

Pagasa’s chief astronomer said the maximum peak nights of the meteor shower would be on Oct. 21 and 22 where at least 15 meteors per hour are expected to streak across the sky.

A bright moon could make some of the meteors appear faint. “We are still not sure of the weather by Oct. 21 and 22. We can only hope for clear skies to get a good view,” he told the Inquirer.