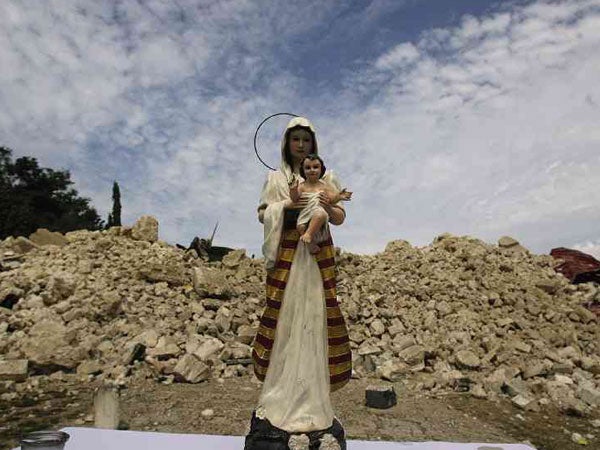 MADONNA STATUE AMID RUBBLE A statue of the Virgin Mary and the Infant Jesus is set at a makeshift altar before a pile of stones that was the 180-year-old Our Lady of Light Church in Loon, Bohol province, a day after a 7.2-magnitude quake destroyed the church. MARIANNE BERMUDEZ

MARIBOJOC, Bohol—Two statues of the Blessed Virgin Mary stand—without any blemish—amid the ruins of two churches in Maribojoc and Loon towns following Tuesday’s devastating earthquake. It was enough for residents to raise their hopes that life will get better.

“It was a miracle,” Carol Ann Balansag said after residents of Barangay (village) Poblacion were surprised to find the 18th-century statue standing askew but without any scratch on the rubble of what used to be the Santa Cruz Parish Church.

The same feeling of amazement was felt by at least 600 people staying in makeshift tents on the church grounds of the Our Lady of Light Parish Church in Barangay Napu in Loon town. They were teary-eyed when they saw the grotto of the Birhen sa Kasilag (Our Lady of Light).

“The earthquake destroyed the church, but it spared our patron,” said Fr. Tom Balatayo, one of the residents.

In Manila, Archbishop Luis Antonio Cardinal Tagle reminded Catholics to find “faith in the midst of ruins” as he noted that the historic churches destroyed by the earthquake needed something beyond physical reconstruction.

“Looking at the images of the churches crumbling, I could almost hear God’s message to Saint Francis of Assisi: ‘Build my Church, rebuild my church,’” Tagle said in his homily during Mass on the first day of the Philippine Conference on New Evangelization (PCNE) in Manila on Wednesday,

Thousands from across the country and Asia attended the PCNE being held at the University of Santo Tomas. Tagle said the event provided an avenue to rejuvenate the ideals of Catholicism in the midst of secularist and modernist influences buffeting its state.

“We’re opening this conference in the context of the earthquake that jolted Cebu, Bohol and other parts of central Philippines,” he said, adding that seeing the images of destroyed heritage churches broke his heart.

Mass in front of rubble

In Loon, about 600 evacuees attended the Mass officiated by the parish priest, Fr. Joel Ruyeras, in front of the church ruins.

Balatayo said the Mass was an offering to the Blessed Virgin for sparing the residents from the devastation that hit their town.

One of the evacuees, Amelia Sevilla, thanked the Blessed Virgin for protecting her, her husband and their four children, even though they could still feel the aftershocks.

Sevilla said she and her family fled to the church grounds for fear of a tsunami after they saw the sea recede following the quake.

“It’s heartbreaking to see how these heritage churches, which became the foundation of faith for hundreds of years, have now turned into rubble. We don’t even know if they can still be used again,” Tagle said.

Among those destroyed or damaged during Tuesday’s temblor were centuries-old churches in the towns of Baclayon, Loon, Loboc, Dauis, Dimiao, Loay and Maribojoc—all national cultural treasures or national historical landmarks found in Bohol.

What was more saddening, Tagle said, was that the disaster happened at a time when the country was still reeling from the effects of other natural calamities and the government’s alleged misuse of funds.

“We cannot forget what happened to the people in Zamboanga, Jolo, Basilan, Cotabato. Some are just recovering from the effects of the monsoon and Typhoon ‘Santi,’ like the farmers of Nueva Ecija, farmers of Aurora, Quezon,” he said.

“And the people of the Philippines are still grappling with the horrendous revelations these past months about the misuse of government funds, contributions of simple Filipinos meant for social services,” he added.

Tagle spoke of the “daily typhoon of the poor, the abandoned, and the forgotten, those who need to hear the good news.”

The three-day PCNE, dubbed as the Asian gathering of faith, will be instrumental in reigniting not only the Filipino’s Catholic faith, but as well as the Church’s mission of serving poor members of the society, he said.

It will focus on expounding the teachings and liturgy of the Church through a tripartite objective of creating an experience of God in the context of the new millennium, strengthening bonds of communion in the Philippine Church, and inspiring the faithful to live by the spirit of mission.

Tagle said the meeting serves as a “response to the call for new evangelization—a new way of being Church that responds to the emergent powerful culture affected by developments in information technologies, new media and social networking that influence the people’s way of thinking.”

He said he hoped the conference would help the delegates rekindle this kind of love and make them better evangelists.

“How can we construct the Church without love that enables us to break from egoism and self-interest in order to embrace God, neighbor, society and the whole of creation?”

This, Tagle said, was the whole point of the PCNE, which calls for the renewal of faith.

Bohol Gov. Edgardo Chatto said authorities would attempt to restore the historic churches, but some may never look the same again. “The heritage churches are also very close to the hearts of the Boholanos,” he said.

“Every piece of the church should be left untouched so that restoration efforts can be easier,” he said. “It may not be a total restoration, but closest to what it used to be before.”

Emilia Dalagan was sweeping grass outside her home near the 300-year-old church called the Our Lady of the Assumption Shrine in Dauis on the resort island of Panglao when the ground shook.

“The funeral car was crushed by falling debris from the front of the church. The driver was able to get out,” she said.

The back, front and the right wing of the church were destroyed. The structure was said to be made from corals cemented together with egg white.

The head of the Manila Archdiocesan Liturgical Commission said Masses in Bohol’s ruined churches need not be disrupted.

“Masses can be celebrated on a space adjacent to where the churches stood,” Fr. Genaro Diwa said. These can also be held in makeshift tents within the church compound.

“There is nothing wrong with that given the situation,” he noted. “[But] there is no reason why the celebration of the Masses should be disrupted.”

A priest from Tagbilaran City, capital of Bohol, told the Inquirer in an interview that the collapse of the heritage churches in the province was painful to behold.

“There are plenty of parish-based schools in the entire Bohol province, hence churches are most often the places where schoolchildren converge during breaks and religious activities,” said Fr. Julian Lupot Jr., parochial vicar of the St. Joseph the Worker Cathedral in Tagbilaran City.

God is still very merciful to the people of Bohol because He allowed the tragedy to happen on a holiday, where there were no classes and no offices, said Lupot, who is on study leave in Manila and has been doing pastoral care services at hospitals in Muntinlupa City.—With reports from Tina G. Santos and Jocelyn Uy in Manila; Romulo O. Ponte, Inquirer Southern Luzon; and AP