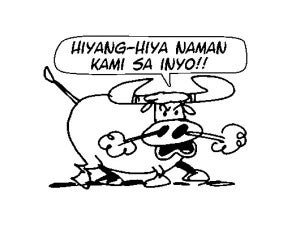 After executives of the Social Security System (SSS) gave themselves a fat P1 million bonus each, managers of the Philippine Health Insurance Corp., or PhilHealth, cannot be far behind.

Not only the top honchos of PhilHealth are going to get gifted in a P1.5-billion bonanza, but also its employees, in spite of findings by the Commission on Audit (COA) that the state health insurance firm hasn’t been performing exactly well.

The COA has also said the SSS had not been a paragon of virtue, but the president of the state pension system for the private sector, Emilio S. de Quiros, went ahead anyway with the bonuses for its board, while at the same time announcing an increase in pension premiums, just like PhilHealth.

At least 19 other government-owned and -controlled corporations (GOCCs) have likewise been authorized to grant themselves bonuses.

He said PhilHealth was still waiting for the approval of the Governance Commission for GOCC for this.

Pargas said the incentives and allowances, which included operating expenses and board meetings, among others, were not given to some officials “only” but also to the 5,600-strong employees of PhilHealth.

Like the SSS, PhilHealth also is raising premium rates next year.

In its audit report for 2012, the COA said PhilHealth since 2007 had failed to reimburse P250.15 million worth of claims by members who had fallen ill and who had required medical treatment.

The report, released on Oct. 10, said the health agency also had not exerted efforts to solve the problem of unclaimed checks refunds accumulation.

Some unclaimed refunds dated 2007 were “still in the process of validation” even for basic details like name of the claimant, confinement dates, amount reimbursed and to be refunded.

The COA said PhilHealth cited the “lack of manpower and computers used exclusively for unclaimed refunds” as one of the reasons for the failure to deliver them to beneficiaries. In fact, the rate of unclaimed benefits has worsened in the last five years.

PhilHealth’s system of tracing intended beneficiaries has gotten so bad that last year, only P109.916 was refunded to members, accounting for a pitiful 0.17 percent, the COA said.

Also, a total of 22,121 paid checks are going stale and had not been reverted to PhilHealth’s account by yearend contrary to PhilHealth Office Order No. 0086 (2012), which mandates the return of outstanding checks after six months.

This, the COA said, resulted in an understatement of its available cash by P98.11 million.

The COA earlier criticized the PhilHealth management for paying its officials and employees P1.45 billion in various bonuses and allowances in 2012 and P1.245 billion in 2011 despite repeated warnings that these had no legal basis.

In an audit report on the SSS released earlier this month, the COA also aired serious concerns about the slow processing of payments of death, disability and retirement claims of its members.

But the pension agency nevertheless rewarded its top executives, just like the PhilHealth will, soon enough.