A case for disaster preparedness 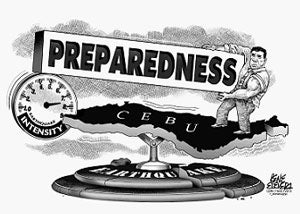 Yesterday’s earthquake that registered a magnitude of 7.2 on the Richter scale left at least 11 dead, scores more injured and damaged several heritage churches in Bohol and Cebu provinces.

We mourn with those who lost their loved ones in the quake, especially those who died after the collapse of a structure in the Pasil fish port and in other places.

We wish all those who were injured a speedy recovery and call on survivors to be Good Samaritans to the worst hit communities in this time of great need.

We acknowledge the service of those who conducted search and rescue operations.

Two things went in the people’s favor even as aftershocks were felt throughout the day following the initial temblor at 8:13 a.m. off Carmen town in Bohol.

The first was the fact that there were no classes due to the Islamic Eid’l Adha holiday. This lessened the casualties that would have been higher with pandemonium in schools and clogged streets.

Second was the fact that people especially in Cebu smarted from the tsunami scare in the wake of last year’s strong earthquake centered in the Tañon Strait.

That the earth shook yesterday must be taken as Mother Nature’s call for the government and the people to be better prepared for disasters.

We can only thank God that no one got hit by falling debris in or around the churches of Bohol and Cebu, which are the nation’s oldest.

The time has come for parish councils and heritage advocates to work for the renovation and restoration of the ancient houses of worship lest they become places of carnage in times of earthquake.

Engineers and local government units must also work to ensure that buildings can withstand earthquakes.

We don’t want to see another disaster like the collapse of the Budget Builders edifice along Natalio Bacalso Avenue in Cebu City that left two people including an infant trapped.

Business establishments must ensure that their workers and clientele are trained on what to do when an earthquake strikes. This is no time to be complacent.

Those in charge of vital installations like water and power supply and telecommunications must learn to be swifter in informing the public through the mass media about the latest developments for their own safety.

It was a swift, executive decision of Cebu City Mayor Michael Rama and Cebu Gov. Hilario Davide III, together with leaders of private schools, to suspend classes at all levels as well as work in campuses until all buildings are checked for structural integrity.

Read Next
What’s in a name?
EDITORS' PICK
Get exciting deals and discounts when you download the new McDonald’s App
In appreciation: Kobe Bryant, a life defined by hard work
DOH warns vs eating raw meat, exotic animals amid coronavirus outbreak
SM continues to send relief assistance to remote towns in Batangas
‘House of Kobe’ launched in Valenzuela City hours before hoops star’s death
4 Ways Jollibee’s new store will serve a leveled-up kind of joy to Filipinos in the South
MOST READ
College baseball coach, wife and daughter die in crash that killed Kobe
3 Chinese admitted to San Lazaro Hospital after showing signs of flu
Lack of witnesses prompts Makati Court to reset Trillanes’ rebellion trial anew
Kobe Bryant’s helicopter flew in fog that grounded other choppers
Don't miss out on the latest news and information.