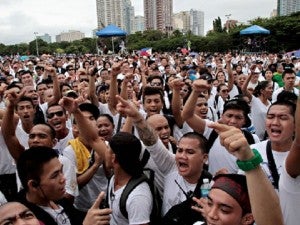 Close to half of adult Filipinos are calling for the abolition of the pork barrel, with an even bigger number believing that the graft-ridden fund is used to finance the election of politicians and their relatives, and amass kickbacks, according to a survey by Pulse Asia Research Inc.

Only 10 percent of the respondents favored letting lawmakers keep the Priority Development Assistance Fund (PDAF), the official name of the pork barrel that finances pet projects of senators and members of the House of Representatives.

In face-to-face interviews with 1,200 respondents aged 18 and above who were randomly selected nationwide, Pulse Asia also found that 67 percent believed that corrupt practices during the Arroyo administration involving the PDAF continued under the Aquino administration.

Most Filipinos, thus, approved of President Aquino’s announcement that the time had come for the scrapping of the pork barrel.

For about one in three Filipinos (32 percent), politicians were using the PDAF to get themselves and their relatives elected, while another 27 percent said the pork had given lawmakers an opportunity to receive bribes and commissions.

The survey was conducted from Sept. 14 to Sept. 27 amid the series of Inquirer reports on the P10-billion pork barrel scam that businesswoman Janet Lim-Napoles allegedly masterminded in collusion with several senators and members of the House of Representatives over the past 10 years.

Two days before Pulse Asia conducted the survey, whistle-blower Benhur Luy testified in the Senate blue ribbon committee that lawmakers had pocketed up to 50 percent of the supposed cost of projects coursed through bogus nongovernment organizations and that Napoles got 40 percent and government conduits, 10 percent.

On Sept. 16, the National Bureau of Investigation filed plunder, graft, bribery and malversation charges in the Office of the Ombudsman against Napoles, former Senate President Juan Ponce Enrile, Senators Jinggoy Estrada and Ramon Revilla Jr. and 34 others in connection with the pork barrel scam.

These and other related developments, including the Million People March at Manila’s Rizal Park on Aug. 26 against the pork barrel, helped raise awareness among Filipinos of the corruption-tainted fund for lawmakers.

Almost a fourth (23 percent) of the respondents said pork barrel releases were used by the President to get the support of lawmakers in passing administration-backed bills, while only one in five (19 percent) said the fund helped significantly in developing their respective areas.

While about two in every three respondents (63 percent) approved of Aquino’s declaration that the controversial PDAF should be abolished, about the same percentage (67 percent) believed that the anomalous use of the funds had persisted under his watch. 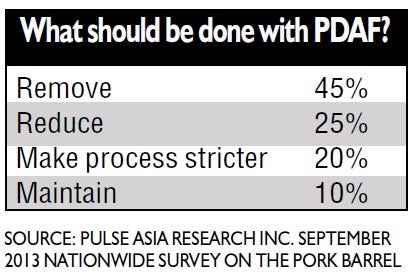 Asked about what should be done with the pork barrel, only 10 percent said it should be maintained.

About half (45 percent) of the respondents said the pork barrel should be scrapped and the implementation of projects and programs for the people should be left to government agencies.

For one in every four respondents (25 percent), the pork barrel should be reduced so that lawmakers could still have their own projects and programs for the people.

This opinion was shared by 24 percent in Metro Manila and the Visayas, and 26 percent in Luzon outside the metropolis and Mindanao.

Among respondents from Class D, 24 percent had the same opinion, as did 25 percent among  those from Class ABC, and 27 percent from Class E.

Only one in every five respondents (20 percent) said lawmakers should be allowed to keep the PDAF, but the process of using it should be made stricter to avoid any anomalous use.

Across areas, the opinion that the pork barrel was used by politicians and their relatives to get elected ranged from 28 percent in Metro Manila to 41 percent in the Visayas.

“While a big plurality of Visayans say the PDAF is used by politicians for electoral purposes, public opinion on the matter is generally split in the other geographic areas as well as across socioeconomic classes,” Pulse Asia said in a statement.

The proportion of those sharing the opinion that the pork barrel provided lawmakers with opportunities to receive bribes and commissions ranged from 15 percent in the Visayas to 37 percent in Luzon outside Metro Manila.

Those who said the pork barrel helped in developing their respective areas ranged from 13 percent in Balance Luzon to 25 percent in Mindanao.

Majorities ranging from 60 percent in Metro Manila to 65 percent in the Visayas and Mindanao, and from 63 percent of respondents from Class D and Class E to 68 percent from Class ABC, said they approved of Aquino’s response to issues surrounding the anomalous use of the PDAF.

Majorities across areas and classes ranging from 66 percent in Luzon outside Metro Manila to 69 percent in Mindanao and the metropolis said the misuse of the PDAF continued during the Aquino administration.