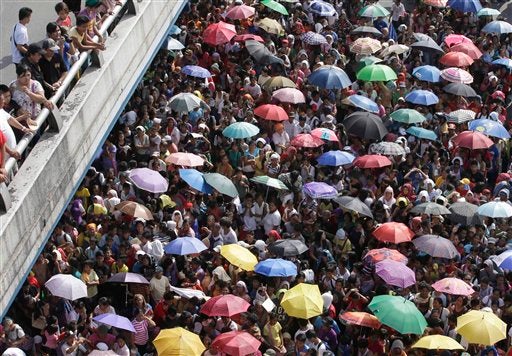 The evangelical mission by the one of the country’s largest Christian sects paralyzed traffic in Manila and forced the cancellation of classes in several cities of metropolitan Manila as thousands trooped to several distribution areas. (AP Photo/Bullit Marquez)

MANILA, Philippines – The traffic eased in many parts of Manila as the massive outreach program conducted by Iglesia Ni Cristo (INC) in the city was winding down Monday afternoon.

Traffic was flowing smoothly along Quezon Boulevard from Quiapo Church up to C.M. Recto Avenue as of 3 p.m. Monday.

Motorists and public utility vehicles were unable to pass through the usually busy thoroughfare in Manila earlier in the day as the INC distributed “goodwill bags” to thousands of people who lined up the streets for hours.

The Supreme Court and other courts in Manila earlier decided to cancel their scheduled hearings for the day due to the traffic jam.

INC’s outreach program was conducted beside the Quiapo Church, along Recto beside Isetann Mall, behind Far Eastern University, and in front of the Philippine Postal Office.

The stage that was set up along Recto Avenue for entertainment performances was disassembled by 2:45 p.m.