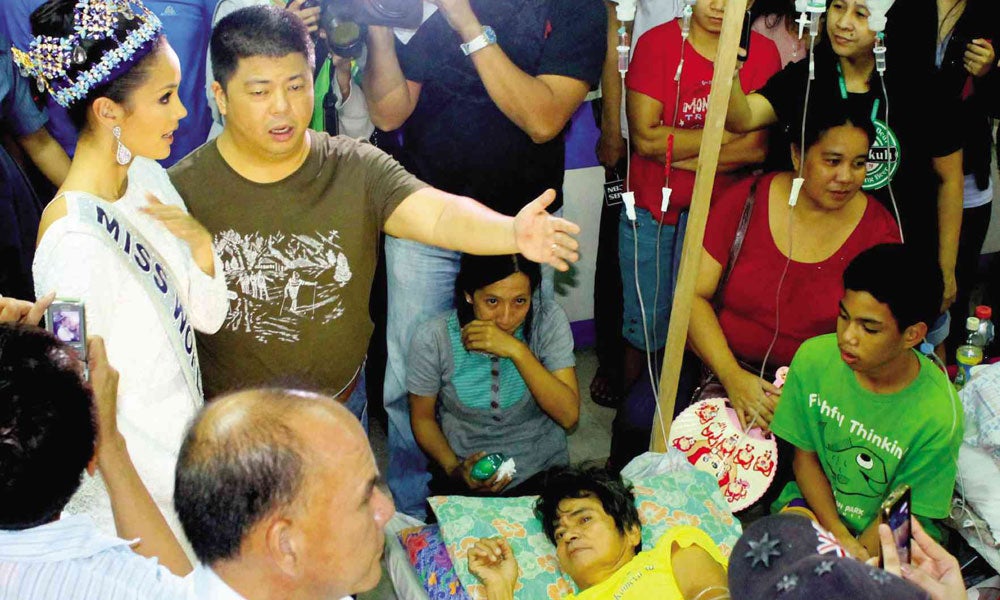 OLONGAPO CITY—People came out in droves on Saturday to get a glimpse of Miss World 2013 Megan Young, a town mate, although the city was going through a dark period after floods last month displaced residents and triggered a leptospirosis outbreak.

Death may have been looming over some people confined in James L. Gordon Memorial Hospital and the passing of Typhoon “Santi” brought near panic among residents, but when the time to welcome Young came, they lined the streets, waved and cheered as her float passed by.

The festive atmosphere followed her from Harbor Point Mall at Subic Bay Freeport, where she was welcomed by local officials, to her stop at City Hall, at a feeding program in one of the flood-devastated villages and at a hospital.

Pepito Dublada, 43, a resident of Tabacuhan and one of the many patients stricken with leptospirosis, was awestruck. “I only see her on television and she’s really beautiful [in person],” he said.

Dublada said he felt rejuvenated just by the sight of Young. “When I saw her, I felt a bit stronger already. She’s so beautiful. She asked me if I was getting better and I said, ‘Now, I am,’” he said.

Dublada, who has been in the hospital for five days and had undergone dialysis, said Young’s visit brought much-needed cheer to everyone.

Young talked to patients, stopping by their beds for a few minutes, asking how they were feeling and chatting with some. She also gave out autographed pictures to some patients.

At least 10 patients have died and more than 400 have been infected by the water-borne disease since floods submerged the city three weeks ago.

Rosemarie Irais, 64, a resident of Sta. Rita, was speechless when Young approached her, being self-conscious about her appearance while TV cameramen and photographers took pictures of them.

Asked what they spoke about, Irais said Young told her that she was pretty. “She told me I was beautiful. I thanked her for that,” Irais said.

Carlito de la Cruz, 56, a vendor from Subic town in Zambales province, may have thought that a goddess visited him. “Can I make a wish?” he said.

De la Cruz said that aside from leptospirosis, he was suffering from glaucoma. “I hope she can help me. I hope my wish reaches her.”

Asked by the Inquirer how she was able to stay grounded even as she had achieved international fame, Young said: “What people don’t know is that the girls that I grew up with in high school [here] have been my closest friends.

“That’s what keeps me grounded. They’re so real to me I can be myself with them, and they don’t judge me. That’s what I love about them because they are so honest,” she said.

Olongapo Mayor Rolen Paulino said the city was fortunate “to have someone like Megan to uplift our morale [in these trying times].”