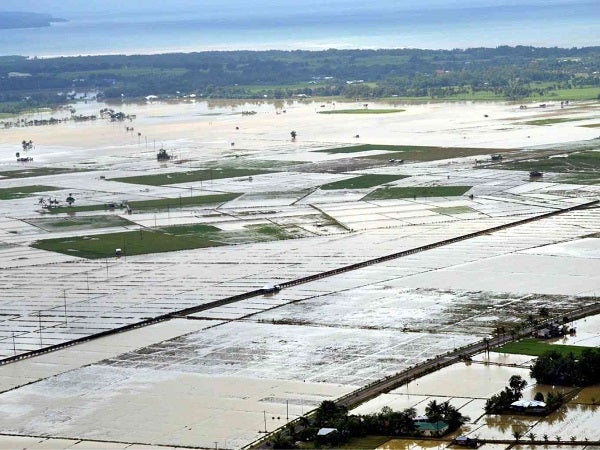 RICE FIELDS of Barangay Malabugas in Bayawan City are underwater following three days of torrential monsoon rains in Negros Oriental, which isolated Bayawan City from the rest of the province and cut off communication lines with the rest of the world. Michael Ocampo / Contributor

Magdaleno Yunting Jr. could still not believe what happened. The 72-year-old man sat on a pile of concrete hollow blocks, staring at the mud that filled his house in Barangay Nangka in Bayawan City following a devastating flood that hit Negros Oriental on October 5.

“The water rose too fast and the current was so strong,” Yunting told the Inquirer. “We thought the flood would not reach our house. We didn’t know it would be different this time.”

His house is near the Bayawan River, but he had not thought of evacuating his family when it started to rain the day before. By the time the water reached neck level hours later, the old man, his wife and their son were already on the rooftop.

In some neighborhoods of Bayawan, water rose to the roofs of two-story houses.

At least 20,000 people from at least four barangay (villages)—Nangka, Tinago, Ubos and Poblacion—fled to public schools, barangay gymnasiums and the City Hall.

Six persons were killed, including a regional police trainee, PO1 Rodelyn Gonzaga, who drowned while trying to rescue residents who were trapped on rooftops. Gonzaga’s body was recovered in the morning of Oct. 7 in Barangay Pacifica, Sta. Catalina town, also in Negros Oriental. 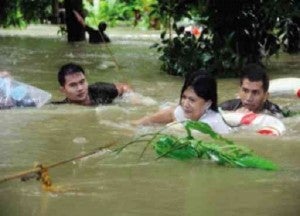 SOLDIERS rescue a woman in Bayawan City during the onslaught of flooding on Sunday. Photo courtesy of 79th Infantry Battalion, Philippine Army

Power and communication lines were cut off.

Several hectares of rice and corn fields were flooded. A 3-ton fishing boat and 15 small vessels were destroyed.

The flood, triggered by incessant monsoon rains, was the worst to hit Bayawan, a grand-slam winner of the Gawad Kalasag Award for its disaster management programs.

City officials were practically at a loss in addressing the disaster, which isolated the city from the rest of the province.

Although orders of preemptive evacuation were announced as early as Oct. 4 when the rain had not stopped, Sarana said some people were hesitant to leave their houses on previous experiences that the floods would not be that bad.

Teresita Taborada, a resident of Nangka, said the village had been through two big typhoons—“Ruping” in the 1990s and “Ursula” in 2003—but the floods were not as devastating. “This was the worst to hit our village and it was not even caused by a typhoon,” she said.

As the flood started to subside on Oct. 7, power slowly returned. Bayawan residents began picking up the pieces, though still shocked over what happened.

Except for 36 families whose houses were washed away, almost all of the evacuees have returned to mud-swept houses, their appliances wet and unusable.

Nangka Elementary School was not spared. Classrooms, chairs and textbooks were covered with mud.

Lolita Lomingkiton, 47, who has lived in Barangay Villareal for 25 years, observed that the floodwater was stronger than previous ones. The laundry woman, her husband and their eight children stay in a house inside the   Gawad Kalinga  Village in Villareal, 2 kilometers from the city proper.

Lomingkiton said she didn’t know how to feed their children, especially that her husband could no longer till their swamped rice field.

Mayor Sarana said he believed that the residents would be vigilant following the tragedy. They “had learned their lesson and would not  be complacent [whenever it rained],” he said.

The city government will tap its P25-million calamity fund after declaring a state of calamity to help the people.

It also plans to put up more drainage structures, especially in areas that were badly hit by the floods, Sarana said.

The mayor said the National Housing Authority had offered to provide P5,000 to each of the affected families to help them rebuild their houses.

Yunting said he would not leave Nangka, his home for more than 60 years.

“We also don’t have anywhere else to go,” he said.