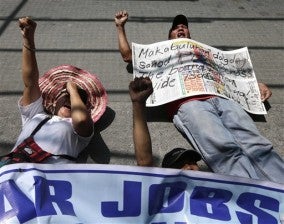 MANILA, Philippines–The Trade Union Congress of the Philippines on Friday urged its representative to the Social Security System, Dr. Marianita Mendoza, to immediately return the P1 million given to her as performance bonus.

Mendoza is the representative of the labor sector in the Social System Commission, the policy-making body of the SSS.

“The TUCP finds it insensitive for SSS officials to give themselves monetary incentives at a time they said the SSS fund is shrinking and that the SSS actuarial fund is only good until 2039,” said TUCP in a statement.

SSS president and chief executive officer Emilio de Quiros Jr. earlier confirmed that he and seven other members of the SSS board got at least P1 million each as bonuses for the good performance in 2012 of the pension fund for employees in the private sector.

The giving of big bonuses to the SSS board members happened even as an increase in membership premiums looms next year on grounds that the agency won’t have enough funds to cover retirement and other benefits beyond the year 2039.

“While the giving of performance bonus may be legally justifiable by the performance incentives system set by the Governance Commission for Government–owned and controlled corporation (GCG), [we believe] that the giving of monetary incentive at this time as inappropriate,” the TUCP said.

According to the labor group, last April, SSS officials sought the TUCP and other groups in convincing 12 million members to accept an increased SSS monthly premium payment from 10.4 percent to 11 percent starting January next year.

The group said it gave its support to the plan because it would help improve the life span of the SSS fund. But it stressed that the giving of the big bonuses was not discussed in any of the consultation process.

Read Next
Shipping operations suspended in typhoon-hit areas
EDITORS' PICK
Acer starts the year off strong with the Aspire Vero National Geographic Edition
The best of bayside and city living at SMDC’s Sail Residences
EDITORIAL: Protecting the polls’ integrity
COVID-19 virus spread slowing down in Metro Manila, says OCTA Research
Over 3 Million worth of prizes to be won at Smart Padala’s SENDali Manalo Promo!
Comelec junks petition to scrap Bongbong Marcos COC
MOST READ
Drug lord Espinosa tried to escape through air vent at detention facility – NBI
In Batanes, octogenarian dies of COVID-19
When to get boosters after positive COVID test
Marcos Jr. visits Cebu, stands as ‘ninong’ to mayor’s son
Don't miss out on the latest news and information.